“The euro was born with great hopes. Reality has proven otherwise.” – Joseph Stiglitz

As the European economy continues to crater given rampant inflation, geopolitical instability, and labor/supply issues, the collapse in the bloc’s currency continued overnight as the euro reached parity with the US dollar for the first time since December 2002. While the round number generates a lot of headlines, it really means little in the broader picture of a weak European economy and what looks to be an even weaker outlook in the months ahead.

Over here in the US, things don’t seem all that much better.  The week has started off slowly in terms of economic data, but this morning’s report from the NFIB on small business optimism came in much weaker than expected at 89.5 versus estimates for a reading of 92.5.  Would you believe that sentiment among small businesses is now lower than it was at any point during the COVID lockdowns?  Admittedly, the NFIB survey does tend to lean Republican, so with Democrats in control of DC, it’s not a complete surprise to see sentiment so weak.  Given the macro backdrop, though, you can’t fault small business owners for being pessimistic.  The last time the headline index from the NFIB was as low as it is now was in January 2013 at the beginning of President Obama’s second term. With the NFIB report behind us, the focus will now shift to tomorrow’s CPI.

In today’s Morning Lineup, we discuss moves in Asian and European markets, the latest developments on the war in Ukraine, and economic data from around the world.

Here is a surprising aspect of recent market events.  With what seems like a near-constant focus that the ARK Innovation ETF (ARKK) gets, we were surprised that given the near 7% decline in the ETF yesterday there wasn’t more attention given to the fact that it had one of its 15 worst days since its inception in late 2016.  The chart below shows the performance of ARKK since the start of 2017, and we have included red dots to show each of the 15 largest daily percentage declines in the ETF’s history.  In the five-plus years that the ETF has been trading, all fifteen of the largest daily percentage declines occurred in either 2020 or 2022.  Even more surprising is the fact that seven of the fifteen largest declines have all occurred since the start of May.  What does it mean when extreme moves become the norm? 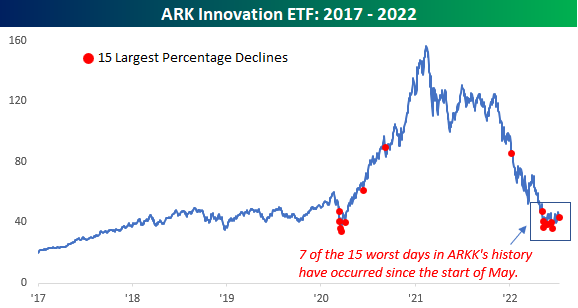