It’s going to be a dismal day on Wall Street both literally and figuratively as “Tropical Storm” Fay moves up the east coast, and futures are firmly lower.  Earnings news continues to be slow, but that will pick up next week as the big banks start to report.  In terms of economic data, PPI is the only release on the calendar, and that came in weaker than expected on both a headline and core basis.  That leaves us with the latest state by state COVID updates to contend with heading into the weekend.

Be sure to check out today’s Morning Lineup for a rundown of the latest stock-specific news of note, an update on the Federal Reserve’s balance sheet, credit growth in China, global and national trends related to the COVID-19 outbreak, and much more.

Every weekend it seems we see pictures from all over the country of people failing to follow guidelines on social distancing. While a lot of Americans seem unable to keep a modest distance between each other when they’re out and about, it hasn’t been a problem for equities.  In yesterday’s trading, the cap-weighted S&P 500 fell 0.56%, while the equal-weighted index performed much worse, falling more than 1.60%.  That’s a pretty wide gap! 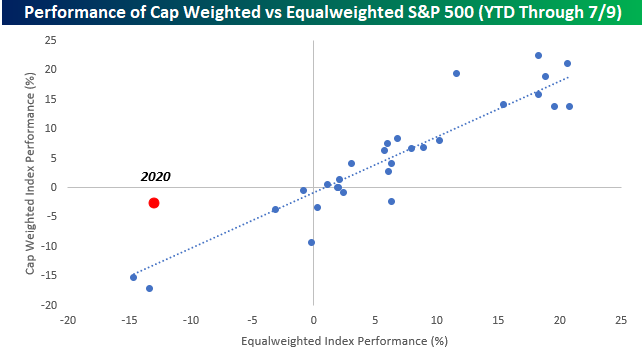 Another illustration of the performance disparity between the two indices can be seen in the YTD performance spread between the two indices.  The chart below shows the spread between the YTD performance of both indices by year since 1991.  When the bars are positive it indicates that the cap-weighted index is outperforming the equal-weighted index and vice versa for negative readings.  At a current spread of over ten percentage points, there has never been another year where one of the indices was outperforming the other by a wider margin. 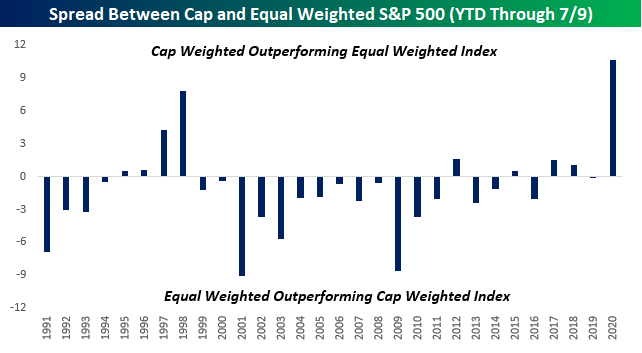