“Remember too that your time is your one finite resource, and when you say “yes” to one thing you are inevitably saying “no” to another.” – Andrew S Grove

Futures are picking up in Q3 right where they left off in Q2, but the declines have been contained to this point.  Weak guidance from Micron (MU) as well as further concerns regarding the health of the consumer following profit warnings in the retail sector haven’t helped sentiment.  Concerns are only more elevated that the economy is either already in or on the verge of a recession even as the Fed continues to press its case for more aggressive policy moving forward.

The only economic indicators of note today are the ISM Manufacturing for June and the May Construction Spending report. If global PMI data that has already been released today is any indication, don’t set your expectations all that high.  Given the holiday weekend coming up, we would normally expect a Summer Friday like today to be on the quiet side, but given the way this year has played out, who knows.

In today’s Morning Lineup, we discuss moves in rates markets and what they’re pricing in regarding Fed policy, movements in Asian and European markets, a recap of global PMI data, and more.

As economic concerns have been ratcheted higher in recent weeks, we’ve seen a sharp pullback in US Treasury yields across the curve that followed the mid-June spike in reaction to the May CPI report and the preliminary UMich Confidence report.  While yields remain elevated, the uptrend that had been in place since earlier this year appears to have been broken.  Going forward, the path of interest rates, especially the yield on the 2-year, will go a long way in determining how stocks perform in the second half.  If the pace of increases experienced in the first half continues in the second half, investors may be facing a long six months. 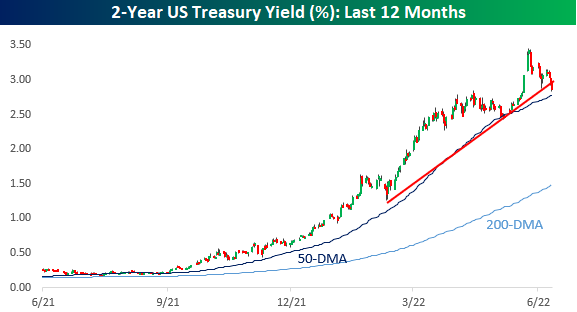