“The difficulty lies, not in the new ideas, but in escaping from the old ones.” – John Maynard Keynes

Like a lot of mornings recently, we’re seeing a mixed picture in futures trading. Today it’s the Dow and S&P 500 futures that are trading in positive territory while the Nasdaq is modestly lower.  It’s a busy day for economic data with Jobless Claims just coming out (initial claims lower than expected and a post-pandemic low) and then Manufacturing PMIs coming out at 9:45 and 10:00 AM as well as Construction Spending also at 10.  Also, be on the lookout for reports of June auto sales which will be released throughout the day.

Read today’s Morning Lineup for a recap of all the major market news and events from around the world, a look at Manufacturing data for the month of June, the latest US and international COVID trends including our vaccination trackers, and much more.

In a post yesterday, we highlighted the fact that 2021 was one of only a small number of years where the S&P 500 never experienced anything more than a 5% pullback from a closing high in the first half of the year.  Over the last 25 years, the only other year that saw such steadiness in the first half of trading was 2017, and in the S&P 500’s history, there have only been 14 other years where the largest pullback through June 30th was less than 5%. 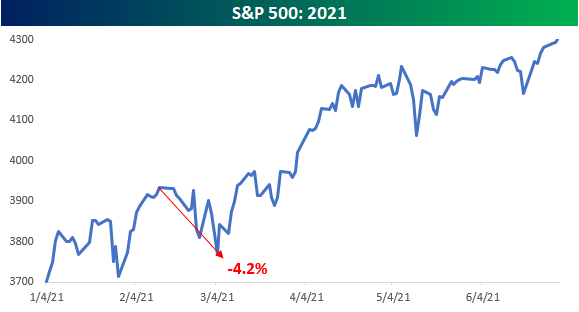 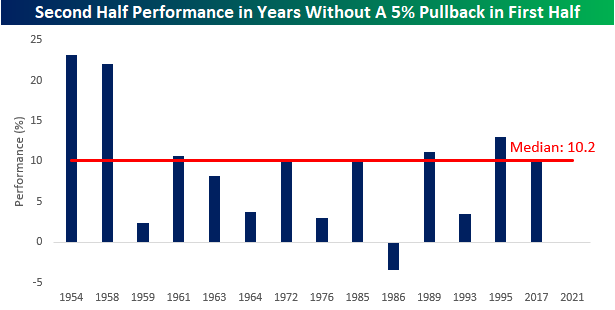