It’s a new quarter for the market, and investors appear to be suffering a bit of a hangover after last quarter’s big gains.  ADP Private Payrolls were just released and came in weaker than expected (2.369 million vs 2.900 million). In any other environment, a miss of over half a million payrolls relative to expectations would have been newsworthy by itself, but when you’re dealing in millions, what’s a few hundred thousand between friends?

Be sure to check out today’s Morning Lineup for a rundown of the latest stock-specific news of note, PMI Manufacturing data for June, global and national trends related to the COVID-19 outbreak, and much more.

When we first started putting the table below together this morning, SPY was indicated to open down by over half of one percent, but as of now, the margin of decline has been cut in half.  Therefore, we have expanded the table to show all days where SPY opened a new quarter with a downside gap of 0.25% or more. Time will tell, but by the time the opening bell rings, we may not even be at that level.

While first impressions in these quarters weren’t very good, SPY’s performance from the open to close tended to be positive with an average gain of 0.38% (median: 0.42%) and positive returns over 70% of the time.  For the rest of the quarter, performance was even better as the SPY averaged a gain of 5.40% (median: 6.94%) with gains over 80% of the time. Also, keep in mind that the largest downside gap to open a quarter was last quarter on April 1st when SPY gapped down over 3.5%.  That certainly ended up being an April Fools’ joke as SPY rallied more than 25% from the close on 4/1 through yesterday’s close. 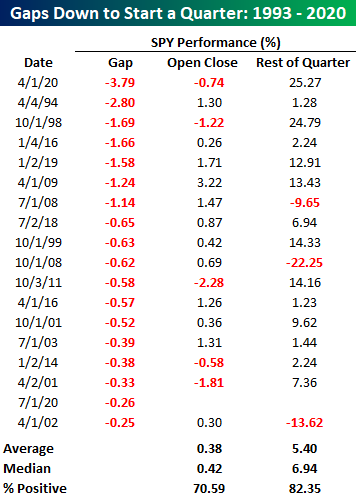