When a company files to sell more than 11 million shares of stock, you wouldn’t expect to see the above statement connected to the offering, but that’s what accompanied the news this morning from AMC Entertainment that it would be selling 11.55 million shares of stock.  Did Yogi Berra write the offering documents?  At a current share price of about $60, AMC will be able to raise $693 million in this equity offering. To put that in perspective, AMC’s market cap at the start of the year was less than half that at $302 million.

In markets this morning, it’s not looking like a positive day for equities.  Futures have been drifting lower for much of the night, but the pace of declines accelerated right around 6 AM.  Whether it was a coincidence or not, that also coincided with the release of news that Russia would cut its holdings of US dollar assets from its Sovereign Wealth Fund.

Read today’s Morning Lineup for a recap of all the major market news and events including a recap of some notable economic data out of Asia and Europe, a recap of moves in the crypto space, and the latest US and international COVID trends including our vaccination trackers, and much more.

Today kicks off a number of data reports for the week concerning employment, and after April’s weaker than expected Non-Farm Payrolls report, there will be a lot of attention on these numbers.  The ADP Private Payrolls report kicked things off on a positive note as the headline number blew away expectations (although April’s reading was revised lower).  Jobless claims were mixed relative to expectations with Initial claims slightly below forecasts and continuing claims coming in higher than forecasts. Layoff announcements from Challenger Gray and Christmas also were encouraging.  Total job cut announcements came in at 24,586, which was slightly higher than last month’s reading of 22,913, but it was also the fifth lowest reading since at least 1999. 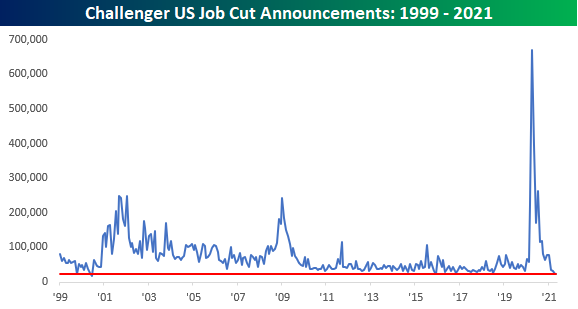