“You can only do so many things great, and you should cast aside everything else.” – Tim Cook

Depending on whether you look at closing or intraday levels, the S&P 500 closed out yesterday within six or twelve points of a record high.  This morning, equity futures are up relative to Monday’s close, and the way things are going now, that closing high from a month and a day ago will be topped at the open.

The economic calendar is light today.  NFIB Small Business Optimism for May was released earlier, and while economists were expecting a modest bounce from April’s level, the actual reading showed a modest decline (99.6 vs 101.0 consensus estimate and 99.8 in April).  A key theme from this month’s report was the fact that almost half of all small businesses said they have been unable to fill open positions.  As an example, 93% of small business owners hiring or trying to hire reported that they received few or no qualified applications.  We’re also likely to see a reinforcement of this trend later this morning when the JOLTS survey shows another likely record number of job openings despite the fact that job creation has been less impressive than forecasts.

Read today’s Morning Lineup for a recap of all the major market news and events including a discussion of the Biogen Alzheimer’s treatment, a recap of activity and economic data overnight, and the latest US and international COVID trends including our vaccination trackers, and much more.

Yesterday marked the beginning of the annual Worldwide Developers Conference (WWDC) from Apple (AAPL).  While the company has been holding this event for over 30 years, its popularity really exploded following the launch of the iPhone in 2007. The conference first sold out in 2008 after Steve Jobs announced in October 2007 that Apple would open the iPhone up for developers to write software.  The WWDC has historically been a noteworthy event for people involved in the development of Apple products, but it hasn’t historically been a great period for the stock.

The table below shows the performance of AAPL stock leading up to and during every prior WWDC in the iPhone era and since the conference first sold out in 2008.  This year marks only the fourth time in the last 14 years where AAPL’s stock was down YTD heading into the conference.  During the conference, though, performance has been on the weak side averaging a decline of 1.43% (median: -1.15%) with positive returns only four out of 13 times. 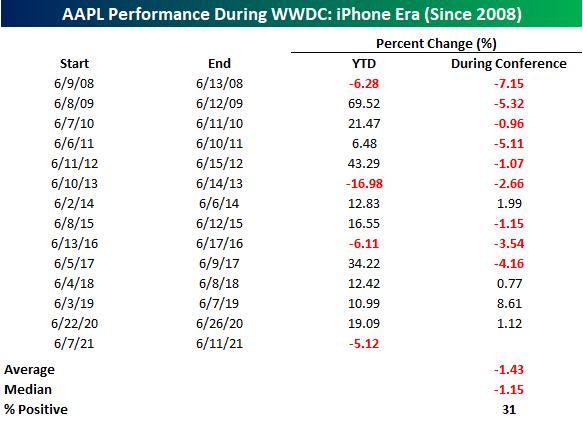