If someone says that “you live in a bar,” the odds are that it’s not a compliment, but if you ever find yourself on the receiving end of that comment, you’re in good company.  John Adams may not have been the first President of the United States, but he was the first President known to have taken up residence in a bar.  On this day yesterday in 1800, President Adams moved into the Union Tavern in Georgetown while construction was being done on the White House.  That means that on this day in 1800, President Adams became the first and only known sitting US President to ever wake up in a bar.  There may have been others in the 220 years since, but to our knowledge, the lips of Secret Service agents have been sealed!

In market news this morning, US futures have moved into positive territory following the weaker than expected May Non-Farm Payrolls report, but the big move has been in the crypto space where bitcoin is down over 7% after Elon Musk tweeted a broken-hear emoji for the token.  A 7% decline on an asset class worth about $700 billion over a tweet?  If last year wasn’t 2020 and this year wasn’t 2021, we’d be surprised at a move like that.

Read today’s Morning Lineup for a recap of all the major market news and events including a recap of the RBI rate decision, economic data out of Europe, and the latest US and international COVID trends including our vaccination trackers, and much more.

Maybe it’s just because the topic is in the front of our minds lately, but it seems as though everywhere we look, the same rangebound pattern shows up.  This morning’s example is the Russell 2000.  All year now, the index has been in a relatively narrow range, and given the fact that the index closed yesterday right in the middle of that range, it doesn’t look like it’s going to break in one way or the other very soon. 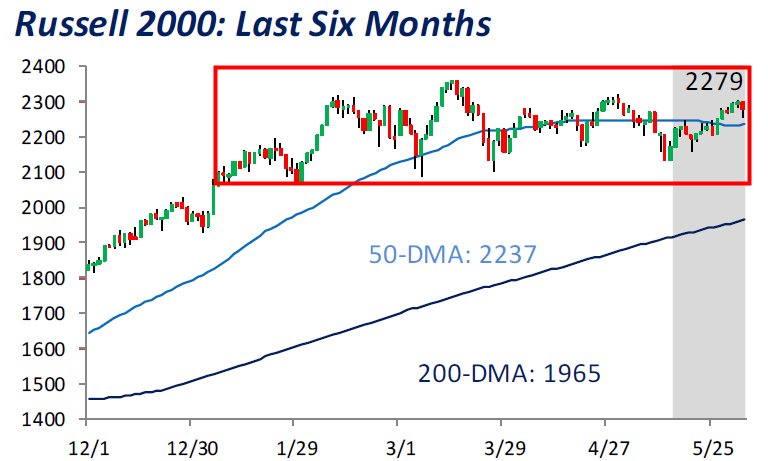