Markets had gotten a boost this morning following the ECB’s decision to nearly double the size of its Pandemic Emergency Purchase Program from 750 billion euros up to 1.350 trillion euros.  While former US Senator Everett Dirksen is famously quoted as saying “A billion here, a billion there, pretty soon, you’re talking real money.”  These days, trillions are the new billions as global central banks continue to flood financial markets with liquidity.

Although central bank liquidity has acted as a support, economic data released this morning was mixed.  Initial Jobless Claims dropped week/week again but came in higher than expected.  Continuing Claims, however, weren’t as strong.  Not only were they higher than expected, but they also increased on a week/week basis. In reaction to the data, some of the post ECB gains were erased.

Be sure to check out today’s Morning Lineup for a rundown of the latest stock-specific news of note, European markets, economic data out of Sweden, global and national trends related to the COVID-19 outbreak, and much more.

This rally continues to amaze just about everyone, and yesterday we saw some encouraging signs regarding its durability.  The latest example is the continued outperformance of the Philadelphia Semiconductor Index (SOX) which rallied 2% for the second day in a row.  At yesterday’s closing level, the SOX has only closed higher six other times in its history! 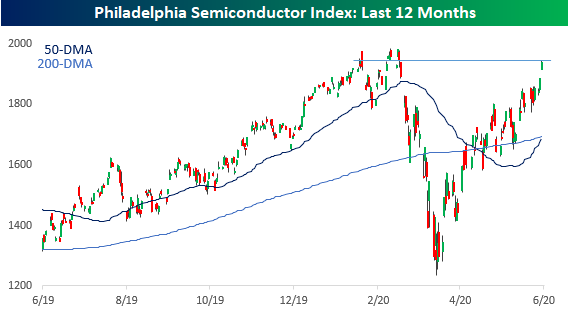