“Everything is going to be fine in the end. If it’s not fine it’s not the end.” – Oscar Wilde

Could you think of a more fitting finish to the worst first half of a trading year in more than 50 years?  Maybe a 5% decline instead?  Futures are indicated lower this morning with the S&P 500 trading down more than 1.4%.  Economic concerns continue to weigh on sentiment as PMI data in China for June rebounded but came in weaker than expected while Industrial Production in Japan also showed considerable weakness and badly missed forecasts. Stocks in Europe are also lower this morning, although economic data wasn’t as bad relative to expectations.

Given the economic weakness and plunging stock prices, Treasury yields are falling both in the US and Europe.  The 2-Year US Treasury yield is back below 3%, while the 10-year yield at 3.03% isn’t that far behind.  On the economic front, at 8:30, we’ll get updates on Personal Income (inline), Personal Spending (weaker), PCE Deflator (lower than expected), and Jobless Claims (generally inline), and then at 9:45 we’ll get the June read of the Chicago PMI.  In response, futures have bounced, but the S&P 500 is still indicated to open down by 1%.

In today’s Morning Lineup, we discuss the latest weakness in Asian and European markets, as well as a look at international economic data.

If current levels in SPY hold, today will be just the 15th time since the ETF’s inception in the early 1990s that it gapped down more than 1% on the last trading day of the month.  Of those 14 prior occurrences, only three were also on the last trading day of the quarter, and today will be the first time that it gapped down this much on the last trading day of the half. In terms of how SPY traded from the open to close on these days, the average (0.54%) and median (+0.49%) return is actually better than the average for all last days of a month since 1993.  However, while the sample size is small, on all three days that SPY gapped down 1%+ to close out the quarter, traders weren’t in a rush to snap up any bargains as SPY traded lower from the open to close all three times. 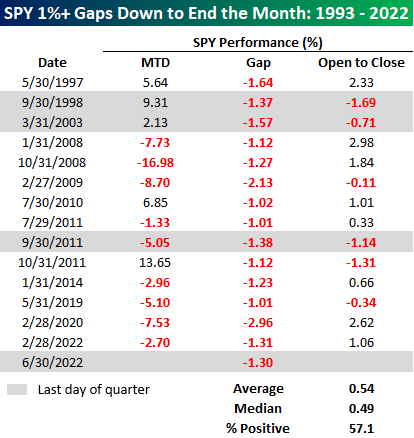