“There’s not many things less important than the score at halftime.” – Bill Self

After a weak open in Europe, US futures sold off earlier but have been clawing their way back ever since.  The weakness in Europe has mainly been on concerns of the spread of the Delta COVID variant as well as weak manufacturing data out of China.  As shown in our economic indicator charts in today’s Morning Lineup, many global manufacturing gauges have clearly shown signs of peaking out in terms of their growth rates.  That’s not a surprising trend as base effects start to wear off, but it has helped to keep a bid under the treasury market.  What is one of the more surprising aspects of the current quarter, though, has to be the fact that with the long-term US Treasury ETF (TLT) rallying 6.1% this quarter, it is actually outperforming the Dow, and underperforming the S&P 500 by less than two percentage points.

Read today’s Morning Lineup for a recap of all the major market news and events from around the world, a look at the explosive move in Tin, notable economic data from Asia, Europe, and North America, the latest US and international COVID trends including our vaccination trackers, and much more.

In a post yesterday, we noted the breakout to new highs in the semiconductor sector after a four-month period of consolidation.  On a relative strength basis, the sector has also picked up the pace over the last six weeks.  The chart below shows the relative strength of the Semiconductor ETF (SMH) versus SPY over the last year.  SMH’s peak on a relative basis began in mid-February just when the sector’s trading range peaked.  For the next three months, the sector significantly underperformed the S&P 500, and it wasn’t until May 13th – the day after the April CPI report – that the sector’s underperformance troughed.  Since then, semis have bounced back in a big way, and over the last two trading days have finally broken the downtrend that has been in place since that mid-February peak.  New highs and a broken downtrend?  It’s been a big week for semis. 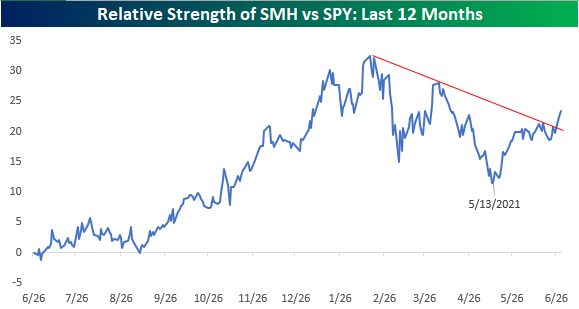