“Work takes on new meaning when you feel you are pointed in the right direction. Otherwise, it’s just a job, and life is too short for that.” – Tim Cook

In the middle of the night, it was looking like it was going to be a positive start to the last trading day of the week, but then news of the Musk ‘super bad’ memo filtered out where the CEO said he wants the company to cut 10% of its workforce citing concerns over the economy.  Ever since then futures have been moving steadily lower and are currently indicating a 0.65% decline at the open.  Obviously, that could change considerably with the release of the May employment report.  Overseas in Europe and Asia, we haven’t seen nearly the degree of negative sentiment in those equity markets as Asia was higher, and Europe is pretty much flat. Treasury yields are little changed across the curve, and crude oil is down modestly.

The May Non-Farm Payrolls report was just released and the headline number was modestly stronger than expected 390K vs 325K. The Unemployment Rate was unchanged at 3.6% versus expectations for a decline to 3.5%.  The average workweek was in line with forecasts (34.6) and average hourly earnings rose slightly less than expected (0.3% vs 0.4%).

Don’t call it a comeback, but if (pretty big if at this point following the TSLA news) the S&P 500 can manage to drop less than 0.45% today, it will mark the second straight week of positive returns for that index.  The chart below shows the rolling six-month total number of positive weeks for the S&P 500.  Just two weeks ago, after a streak of seven weekly declines, the rolling number of positive weeks dropped below ten for the first time since 2011.  What’s also notable to highlight is that in early May, the S&P 500 ended a ten-year run where the six-month average never dropped as low as ten, and that was the longest streak without a reading that low in the entire post-WWII period.  The prior record was ten years from early 1991 through early 2001. 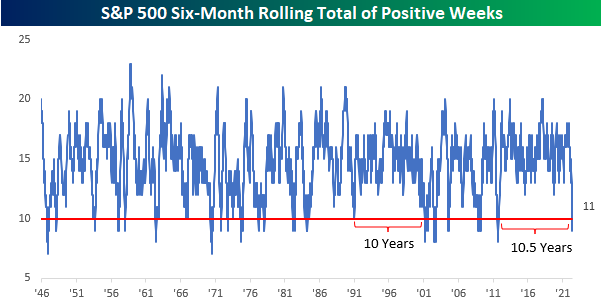