Optimism is hard to come by this morning as COVID case numbers are moving in the wrong direction across most of the country.  Also, an announcement from Disney that it would delay the re-opening of its California theme park throws the whole timetable of the economic reopening into question.

Jobless claims were just released, and while initial claims fell for a record 12th straight week, they were higher than expected.  In the last 12 weeks that claims have declined, they have come in higher than expected nine times!  Continuing claims, however, were a bit more positive as they dropped below 20 million for the first time since mid-April.  Who would have ever thought that a sub-20 million number would be a good thing?  The reaction in the futures market to all this data was negative at first but as we type, they have been quickly recovering.  Stay tuned.

Be sure to check out today’s Morning Lineup for a rundown of the latest stock-specific news of note, European markets and data, global and national trends related to the COVID-19 outbreak, and much more.

Yesterday was the 20th day since the February peak that the S&P 500 was down 2%+ in a single day. In terms of percentages, that’s 22.22% of all trading days during that period.  The table below highlights each of the prior occurrences during that span along with the S&P 500’s performance the following day and week.  In recent history at least, the S&P 500 has had a positive bias following these occurrences with an average gain of 1.28% (median: +0.58%) and gains 63% of the time.  Over the following week, the average change is not as positive with an average decline of 0.47% (median: +0.57%) and gains just barely half of the time.

One thing to note, though, is that the tide really started to shift after St. Patrick’s Day (3/17).  Since then, the S&P 500 has been up the day after a 2% decline eight out of ten times and up the following week nine out of ten times.  Before 3/17, the trend was overwhelmingly negative.  It’s still early, but hopefully, the bulls’ luck hasn’t run out. 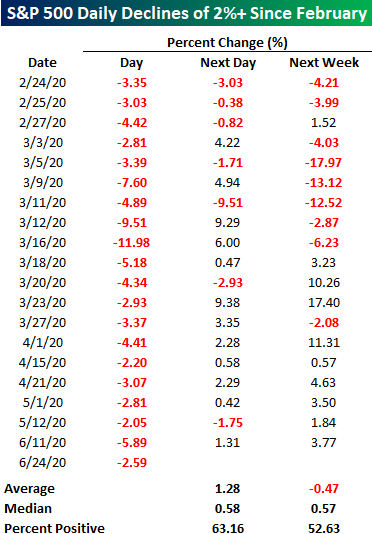