“The riskiest strategy is to try to avoid risk altogether.” – Fredrick W. Smith

This week marks the 12th and final full week of the second quarter and barring a calamitous reversal from pre-market levels, it will be just the second positive full week of trading during Q2.  That’s how bad of a quarter Q2 has been.  Gains this quarter have been awfully hard to come by.

Futures are looking to finish off what has already been a positive week on an up note, but in order to stay there, we’ll have to get through the Michigan Confidence and New Home Sales reports at 10 AM.  The Michigan Confidence report will be an update to the preliminary reading that was released two weeks ago and came in at the lowest level in the history of the survey dating back to 1978. It’s hard to imagine that report getting any worse.

In today’s Morning Lineup, there’s a lot covered as we discuss overnight moves in Asian and European markets, declining volatility in the crypto space, and overnight economic data from Asia and Europe.

It’s been a rough few weeks for copper as yesterday’s 5%+ decline capped off its worst five and ten-day declines since March 2020 at the depths of the COVID crash.  With the title of doctor, copper’s performance is often considered to be a good gauge of the economy’s health, so the recent declines naturally raise economic concerns.

The chart below shows the historical 10-day rate of change in copper going back to 1981. During that span, there have only been seven other periods where copper declined 20% or more in a ten-day span, and as mentioned above, the most recent was during the original COVID lockdowns.  There were also similar or larger declines during the Financial Crisis recession and the recessions of the early 1980s (not quite 20%) and early 1990s.  While large short-term declines in copper did occur during four of the last five recessions, there were also a number of other large declines that occurred outside of recessions (1986, 1987, 2011, and 2018).  Large short-term declines in the price of copper have often occurred during recessions, but they aren’t exclusive to recessions. 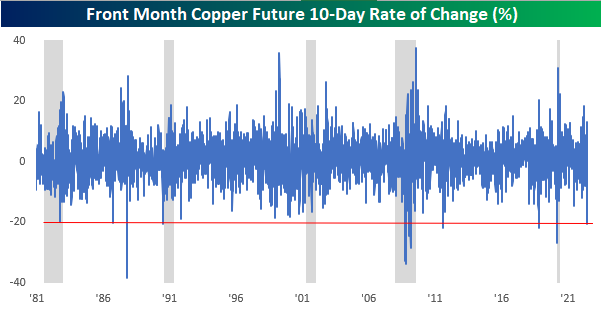