Trying to read the tea-leaves in the ongoing saga between the US and China has become increasingly difficult these days with last night being a perfect example.  Shortly before Asia opened for trading, US futures were moderately higher, but then Trump adviser Peter Navarro dropped a tape-bomb saying the US-China trade deal was ‘over’.  That sent Dow futures from up over 200 to down over 400 in a matter of minutes.  Navarro later walked back those remarks, and even the President took to Twitter to say the trade deal was ‘fully intact‘. (Twitter hasn’t put any warnings or labels on that tweet, so we’ll assume that it’s accurate info!)

After all the overnight ups and downs, futures are actually higher now than they were before Navarro made his comments, indicating a 1.25% gain at the open.

Be sure to check out today’s Morning Lineup for a rundown of the latest stock-specific news of note, how Navarro’s comments have impacted the market in the past, the latest batch of June PMI data out of Europe, global and national trends related to the COVID-19 outbreak, and much more.

Crude oil prices are back above $41 per barrel for the first time since March 9th when Russia and Saudi Arabia started their price war.  What a trip it’s been over the last three and a half months as prices have seen a round trip of around $80 lower and higher during that span. 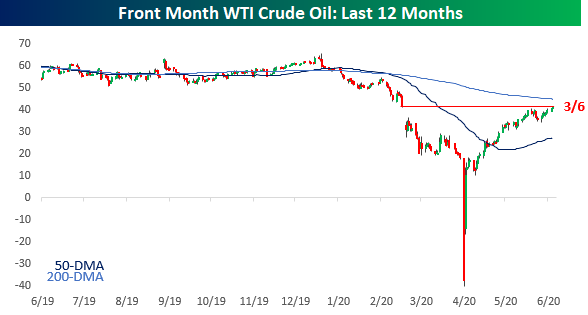 While crude oil prices have recovered all of their losses since the gap down on March 9th, the S&P 500 Energy sector isn’t quite back to its levels from prior to March 9th and has some catching up to do.  At yesterday’s close, the Energy sector was still down over 6.5% from where it closed on Friday, March 6th. 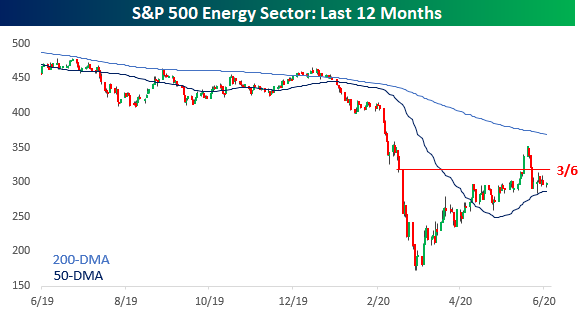