“If you’re feeling good, don’t worry. You’ll get over it.” – Yogi Berra

Bulls look like they have a little more gas in the tank after yesterday’s big rally as futures are modestly higher.  Crypto assets are another story, though, as bitcoin just broke through $31,000 and went tight through $30,000 after that.  Treasury yields are modestly higher, but the 10-year yield still remains below 1.50%.  There’s a decent amount of Fedspeak today with Mester, Daly, and Powell all on the calendar to speak between now and the end of the day.  In terms of economic data, the only two indicators on the schedule are Existing Home Sales and Richmond Fed.

Read today’s Morning Lineup for a recap of all the major market news and events, an update on the decline in crypto assets, overnight economic data, and the latest US and international COVID trends including our vaccination trackers, and much more.

Yesterday’s rally in the S&P 500 saw the strongest breadth in terms of the advance/decline line (+459) since April 2020.  Noth only was breadth notably strong, but it followed a Friday where breadth was notably weak (-401).  With the net A/D reading on both days coming in above +400 or below -400, they both qualified as ‘all or nothing days’.  All or nothing days in the market are uncommon enough, but it’s not often that you see a negative all or nothing day immediately followed by a positive one.  The last time it happened was in early March 2020 just as the market was in the middle of the COVID crash, and there have only been 36 occurrences since 1990.

For the entire year so far, yesterday’s all-or-nothing day was just the sixth such occurrence so far this year putting 2021 on pace for 13.  That’s a far cry from last year’s total of 43, and if the pace keeps up, it would go down as the second-lowest number of all or nothing days for a given year since 2007.  The only other year during that span with fewer was 2017.  One thing to remember, though, is that while the pace so far this year has been slow, as the last two trading days have shown, all or nothing days often tend to show up in bunches. 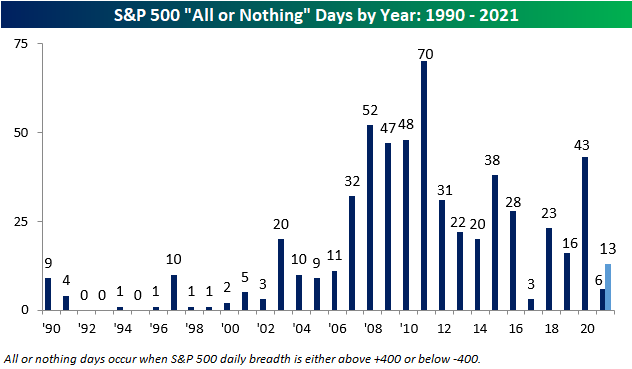