“We can offer sunshine that glows bright in the afterthought, and scatters the darkness of the tenement for the price of a nickel or a dime.” — L.A. Thompson

138 years ago yesterday, the first roller coaster in the United States opened at Coney Island.  Called the Switchback Railway, it was invented by LaMarcus Thompson, and in the years since the roller coaster has become a staple of American leisure activities.  The one area where we like to avoid them as much as possible is in the financial markets.  Unfortunately, investors haven’t been able to dodge them this year.  Making matters worse, the last several days have been more like the ride Free Fall than anything else.  After all, in order to have a roller coaster, there have to be ups and downs.

Futures are higher heading into the last trading session of the week, and whether they hold into the close is probably a bet many investors wouldn’t take at this point given the tendency to give up gains intraday. We’ll also get some important reports on Industrial Production (9:15), Capacity Utilization (9:15), and Leading Indicators (10:00).

In today’s Morning Lineup, there’s a lot covered as we discuss the latest moves from the BoJ, and overnight economic and market data in Asia and Europe.

We’ve been calling it the one step forward and two steps backward market for some time now, and yesterday and today provides another illustration of that pattern.  After rallying over 1% following yesterday’s Fed meeting, the S&P 500 is indicated to open down about 2.0% this morning, more than erasing all of Wednesday’s gains.  Keep in mind too, that even after Wednesday’s rally, the trailing five-day performance of the S&P 500 was a decline of just under 8%.

For the second week in a row, the S&P 500 is closing out trading with a decline in nine of the last ten weeks.  In the post-WWII period, there have only been three other periods where this has occurred. Besides the fact that all three were lousy market environments, another theme they all have in common is that they all occurred in the middle of recessions.  In 1970, the economy was six months from bottoming out, while in March 1982, the economy was more than a half year into a recession and eight months from its trough.  Lastly, the period ending in early April 2001 was just one month into a recession that had another seven months left to go. 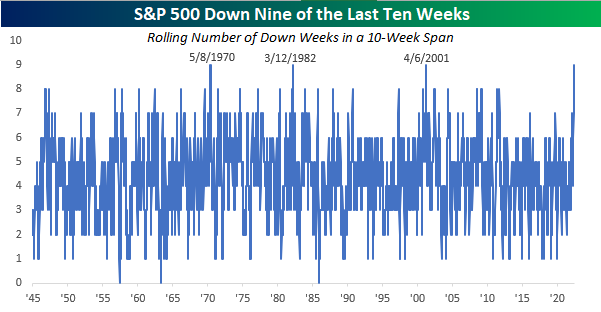