Markets are poised for another positive start to the day today, although not nearly to the degree of yesterday’s surge.  On the economic calendar, today’s big reports are Housing Starts and Building Permits.  While the continued surge in mortgage applications suggested a positive backdrop for housing, the actual numbers came in weaker than expected.  Housing Starts were expected to come in at a level of 1.1 million but were well short at 974K.  For Building Permits, the 1.220 million print was also weaker than the 1.245 million consensus estimate.

Be sure to check out today’s Morning Lineup for a rundown of the latest stock-specific news of note, European auto sales, mortgage applications, global and national trends related to the COVID-19 outbreak, and much more.

In yesterday’s report, we discussed the rally in chips and how semiconductors trading at new highs relative to the S&P 500 was a positive trend for the broader market.  From yesterday’s discussion of chips, today we wanted to highlight ‘dips’ and how investors have been buying them recently.  In the last three trading days, the S&P 500 ETF (SPY) has finished the day more than 1.5% above its intraday low.  That may not sound all that noteworthy, but before two occurrences in March, the last time we saw a similar pattern was back in 2011.

The idea of consistent buying on the dips sounds like a positive trend, but the reality is that it isn’t much of a consistent signal in either direction.  The most recent occurrences in March, late 2011, and late 2008 all occurred in the later stages of market declines, but there was also an occurrence right near the 2007 peak as well as multiple occurrences from 2000 right through 2002.  It sounds great in theory, but this is one trend we wouldn’t put much stock into. 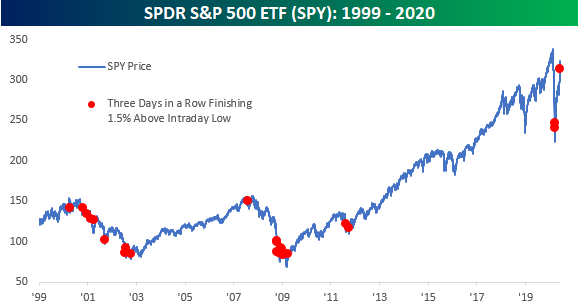