“You simply flooded the system with money?” – Scott Pelley

Happy Fed Day! There’s been a lot of talk this week that today’s FOMC decision is the most important of Jay Powell’s career.  We’re never one to diminish the importance of a Fed meeting, but most important ever?  Even in this era where comments seem to mean nothing unless they make for a splashy headline the term ‘most important’ may be an overstatement.  Have we already forgotten the days 15 months ago when the entire financial system was seizing?  Say what you want about what some of the consequences may have been to the FOMC’s actions, but we’d bet that the economy would be in worse shape now had it not been for the steps that the FOMC took when they took them at last year’s very important meetings.  Today’s rate decision may be the most important rate decision of the spring or even this year, but it’s probably not the most important of Powell’s career.

In economic data this morning, Housing Starts and Building Permits both missed expectations for the second straight month, while Import Prices rose more than expected.  In reaction, futures have actually seen a modest bounce as the 10-year yield saw a slight decline in yield.

Read today’s Morning Lineup for a recap of all the major market news and events, the latest economic news from around the world overnight, economic data out of China, and the latest US and international COVID trends including our vaccination trackers, and much more.

Commodities have been on fire recently, but some areas of the space have been showing some short-term cracks.  As shown in a one-year chart of copper, it has been in a steady uptrend for the last year and has repeatedly found support at its 50-day moving average.  While it didn’t get a lot of attention yesterday, though, copper fell more than 4% for its second-worst day of the last 12 months and broke below its 50-DMA in the process. 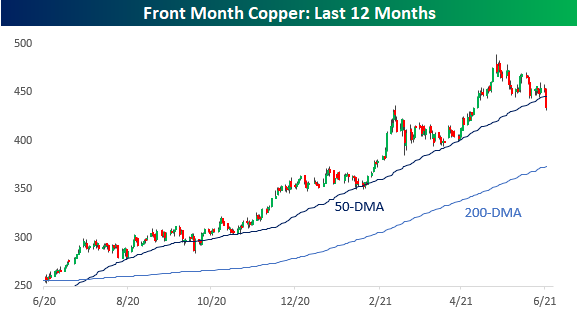 Not only was Tuesday the second weakest day for copper in the last 12 months, but after closing 2.76% below its 50-day moving average, it was also the second most oversold reading for copper on this metric in the last 12 months.  From a longer-term perspective, closing 2.8% below the 50-day moving average is hardly an extreme amount by any measure, but coming ahead of an FOMC meeting where the predominant view is that inflation is out of control, copper’s weakness, along with declines in some other commodities in recent weeks, warrants at least a mention.