“Everything you’ve ever wanted is on the other side of fear.“ – George Adair

With last week’s CPI report behind us, the market shifted its focus to the FOMC rate decision, and that day has now arrived.  Futures are higher heading into the report, but we just got a slug of economic data (Retail Sales, Empire Manufacturing, and Import and Export Prices).  Overall, the results weren’t pretty with Export Prices the only indicator that came in higher than expected.  Both Philly Fed and Retail Sales were not only weaker than expected, but they were also negative at the headline level.  Economic data is going one way (down), and interest rates are going the other (higher).

In today’s Morning Lineup, there’s a lot covered as we discuss the latest moves in crypto (pg 4), the ECB emergency meeting to address spreads widening in peripheral countries (pg 4), a preview of tomorrow’s BoJ meeting (pg 4) and today’s Fed decision (pg 5), a recap of market moves in Asia and Europe (pg 5), overnight economic data in Asia and Europe (pg 6), and much more.

After four days in a row of 1% to multi-percentage point daily declines, yesterday’s 0.38% drop in the S&P 500 almost seemed like an up day. Nevertheless, yesterday’s decline was large enough to bring the S&P 500’s five-day decline to over 10% which is a magnitude of decline we haven’t seen since the COVID crash (when there were multiple).  The chart below shows the S&P 500 (on a log scale) going back to 1960, and the red dots indicate any time when the trailing five-day return was greater than 10%.  What’s really interesting to note about this chart is that prior to 2000, the only times since 1950 that the trailing five-day decline exceeded 10% were in May 1962, October 1987, and August 1998.  Since 2000, though, these types of declines have become much more commonplace with spikes in downside volatility occurring every few years. 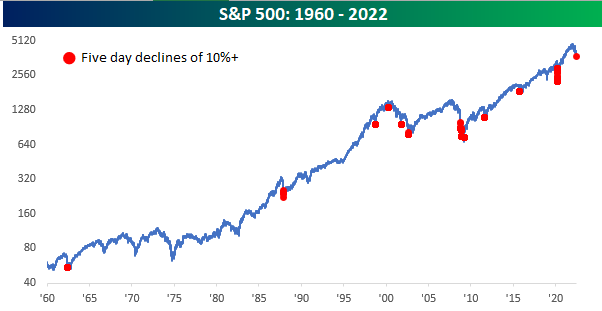