“The curious task of economics is to demonstrate to men how little they really know about what they imagine they can design.” – Friedrich August von Hayek

In terms of the economy, there’s a lot on the calendar this week, but it starts out slow as there are no reports to kick off the week today.  A number of indices in Asia were closed overnight, but Japan was open and managed to rally 0.7% as Industrial Production surprised to the upside.  European indices are trading higher to kick off the week as Industrial Production in the region also doubled expectations (0.8% vs 0.4%).  In US markets, futures are mixed with the Dow lower, the S&P 500 flat, and the Nasdaq higher.

With not much going on in financial markets, the real action has been in bitcoin which is trading at its highest levels since late May following comments on Sunday from Elon Musk that Tesla may start accepting bitcoin as payment again in the future provided there’s confirmation of ‘reasonable (~50%) clean energy usage by miners with a positive future trend’.  These days, that’s enough to move a $700 billion asset by over 5%.

Read today’s Morning Lineup for a recap of all the major market news and events, the latest economic news from around the world overnight, including Industrial Production in Europe, and the latest US and international COVID trends including our vaccination trackers, and much more.

It was a pretty positive week for US equities last week.  In the “US Index” screen of our Trend Analyzer, every index ETF we track with the exception of the Dow (DIA) finished the week higher.  DIA’s weakness primarily stemmed from a nearly 10% drop in shares of Caterpillar (CAT).  With the rally last week, all of the ETFs listed head into the new week at overbought levels with a neutral timing score.  You can’t get much more uniform than that. 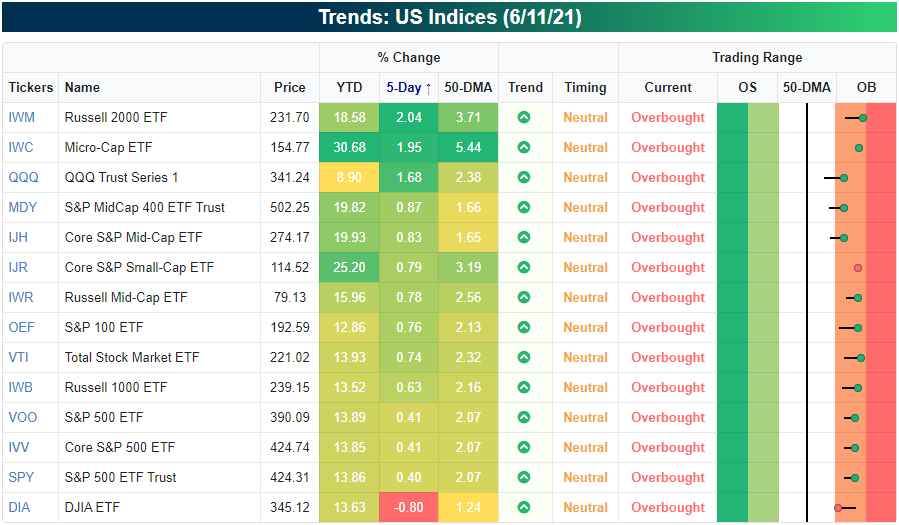 While the ‘wide-angle’ view of US indices shows a good deal of uniformity, at the sector level there has been a lot more dispersion.  Six sectors finished last week higher, and five traded lower.  The biggest winners of the week were Health Care, Real Estate, and Technology, while cyclical sectors like Financials, Materials, and Industrials all fell more than 1%.  In many respects, last week was a bit of a reversion to the mean trade where the biggest winners traded lower while the biggest underperformers had their day in the sun.  To illustrate, the six sectors that were up on the week are now up an average of 12.95% while the five sectors that were down are still up an average of 23.6% YTD.