So much for the ‘million job print’.  While economists were expecting to see a print of one million jobs, the actual print was barely even a quarter-million at 266K. Not only that but last month’s print was revised lower by nearly 150K.  In reaction, the 10-year yield has plummeted below 1.5% and Nasdaq futures are surging up nearly 200. These reactions may be a little bit too much of a knee-jerk, so we’ll see how things play out as the day goes on.

Read today’s Morning Lineup for a recap of all the major market news and events including a recap of overnight earnings reports and economic data as well as the latest US and international COVID trends including our vaccination trackers (which continue to show a significant deceleration in vaccine uptake), and much more.

Looking back at prior occurrences over the last year and ten years, the frequency of positive returns over the next week (~62%) for the Nasdaq is just as common following these occurrences as it is for all one-week periods over the same time period.  That being said, while the frequency of positive returns is similar, the magnitude of the Nasdaq’s median move following these reversals is moderately higher (1.1% vs 0.55%). 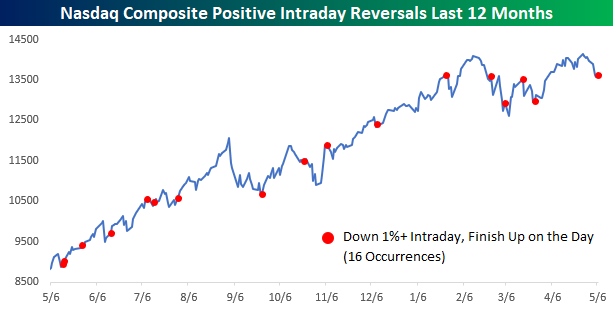