“Invest in yourself. Your career is the engine of your wealth.” – Paul Clitheroe

4,131.93.  That’s the level the S&P 500 will have to close above today in order to end the four-week streak of declines.  After yesterday, it’s hard to believe that the S&P 500 is still up on the week, but as long as it doesn’t fall more than 0.36%, that will remain the case.  There’s still a lot for the market to navigate through between now and the 4 o’clock closing bell, including the April Non-Farm Payrolls report and a number of Fed speakers.

As we pointed out in our Chart of the Day earlier this week, breadth, as measured by the S&P 500’s 10-day advance/decline (A/D) line had yet to reach (and still hasn’t) extreme readings relative to other pullbacks since 1990.  Yesterday’s mauling, though, did mark the fourth time in the last ten trading days that the net A/D reading for the S&P 500 was -400 or less.  Going back to 1990, there have only been four other periods where there have been this many or more ‘Nothing’ days in a 10-trading day span.  The most recent was in March 2020 when there were a total of six in ten days.  The other three periods were September 2015 (peak of four), October 2011 (peak of five), and October 2008 (peak of five). 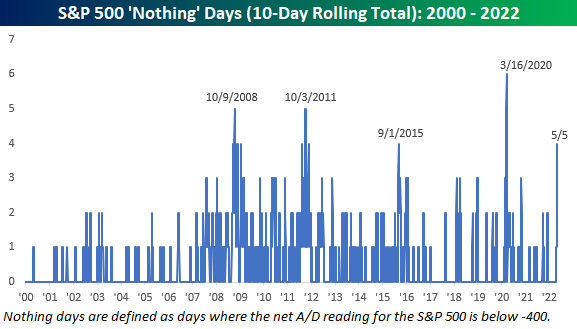 Obviously, the periods shown above occurred during market downturns, and that is evident in the chart below where every red dot indicates days when the 10-day trailing total of ‘Nothing’ days was four or more.  Looking at each of the prior periods below and measuring performance from the first day in each one when the 10-day total reached four, the S&P 500 continued to see additional declines over the following one, three, six, and twelve months in 2008, but for the other three periods shown, performance over the following three, six, and twelve months was positive.  Is the current period more like 2008 or the other three periods?  Or is it a completely different period altogether? 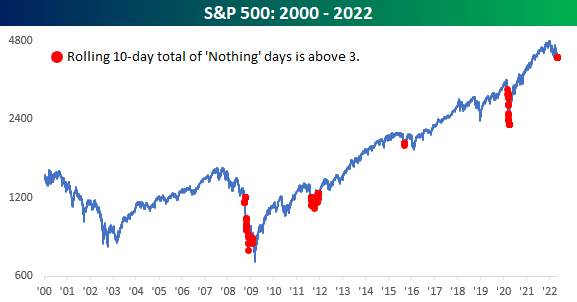