“Democracy is the destiny of humanity; freedom its indestructible arm” – Benito Juárez

Futures are moderately lower this morning following yesterday’s major post-Fed surge.  After taking the declines into account, though, the S&P 500 is still higher than it was heading into the last hour of yesterday’s trading.  Economic data this morning was mixed to negative.  Non-Farm Productivity and Initial Jobless Claims were weaker than expected, Unit Labor Costs were higher than expected, and Continuing Jobless Claims were the only data point that was stronger than economist forecasts.

In today’s Morning Lineup, we recap overnight events in Asia and Europe (pg 4), the BoE’s latest policy decision (pg 5), other Asian and European economic data (pg 6), and a lot more.

Shifting the focus to last-hour rallies, 1%+ gains in the final hour of trading aren’t nearly as uncommon.  Since the mid-1980s, it has happened 168 times and looking at the chart, they have occurred in all types of market environments – uptrends, downtrends, near peaks, and near bottoms, so it’s hard to read too much into their significance. 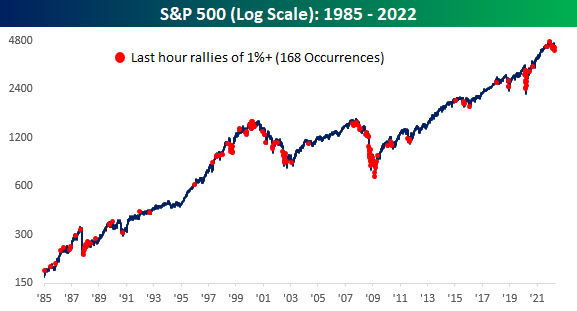