“During this time of reopening, we are likely to see some upward pressure on prices…But those pressures are likely to be temporary as they are associated with the reopening process.” – Jerome Powell

The above comments from Fed Chair Jerome Powell were made a year and six days ago today, and we’d be willing to bet that when he made them he never imagined that one year later CPI would be over 8.5% on a y/y basis and accelerating.  It just goes to show that predicting the future is hard, and today’s foregone conclusions are often hindsight’s most embarrassing moments.

Futures are actually higher this morning, and while we’re still far from the closing bell, a positive close would be the S&P 500’s first three-day winning streak since late March.  Before we can get there, though, we still have to digest the weaker than expected ADP Private Payrolls Report which came in at 247K compared to forecasts for an increase of 385K.  At 10 AM, we’ll get the ISM Services report, which is expected to show a modest uptick from 58.3 to 58.5.  The big event of the day, obviously, will be the FOMC rate decision at 2 PM and the press conference at 2:30.  For much of Powell’s tenure as Fed Chair, when he speaks, investors sell, so hopefully for the bulls, the most hawkish outcome is already priced in.

Mick Jones of The Clash couldn’t decide whether he should stay or go, and in a similar way, the market can’t decide whether it wants to rise or fall.  While the ultimate direction this year has been to the downside, in looking at the intraday range of the S&P 500 over the last 100 trading days, we’ve increasingly seen a trend where the market trades in positive and negative territory in the same session.

The chart below shows the 100-day rolling number of days where the S&P 500 tracking ETF (SPY) traded in both positive and negative territory relative to the prior day’s close.  Through yesterday’s close (5/3), the S&P 500 traded in positive and negative territory on 69 of the last 100 trading days.  That’s slightly off the recent peak of 71, but as shown in the chart, the market hasn’t been this indecisive since July 2014.  Make up your mind already! 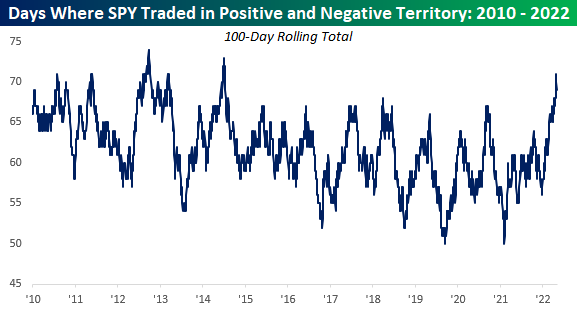