After a strong rally in April, US equities have started a bit of a losing streak in the last three days.  If this morning’s weakness in futures persists, it would be the longest losing streak in about two months.  The negative tone this morning can be blamed on Warren Buffett whose tone at this weekend’s annual meeting wasn’t particularly positive as he disclosed that he has sold his entire stake in the major four airlines making Berkshire a net seller of equities.  That didn’t set a particularly positive tone for the opening of futures Sunday night, but we’re currently off the lows, and as we have reminded a number of times over the last few weeks, though, there’s still a lot of time between now and the closing bell at 4PM.

Be sure to check out today’s Morning Lineup for a rundown of the latest stock-specific news of note, Markit PMI data, and the latest stats and trends on the COVID outbreak.

A lot of people may have missed it Friday afternoon, but Auto Sales data for the month of April was the worst on record.  According to WARD’s data, total sales for the month were just 8.58 million on a seasonally adjusted annualized rate.  Going all the way back to 1976, there has never been a weaker month.  While the print was weak, it was actually considerably better than consensus expectations of just 7.0 million.  So it was an absolutely awful print, but not quite as awful as expected. 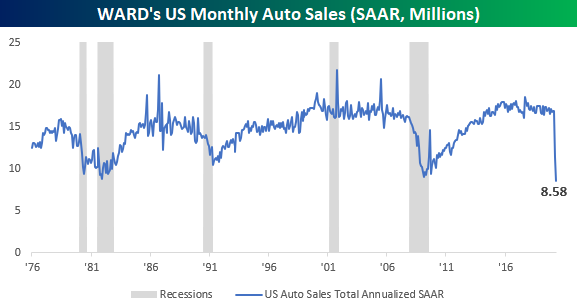