“In times of great stress or adversity, it’s always best to keep busy, to plow your anger and your energy into something positive.” – Lee Iacocca

Futures have been trading on either side of the flatline this morning and most of the overnight session as investors look to digest Monday’s volatility.  US Treasury yields are modestly lower along with crude oil prices, while bitcoin is either modestly higher or lower depending on when you look.  In economic data, Germany had some better than expected data related to employment, and this morning in the US we’ll get updates on Factory Orders, JOLTS, and Durable Goods.

That was quite a reversal in the S&P 500 yesterday!  After trading down over 1% heading into the final hour of trading, the market got an early start on a ‘turnaround Tuesday’ and rallied nearly 2% into the close.  By the time the closing bell rang, the S&P 500 was up over half of a percent. 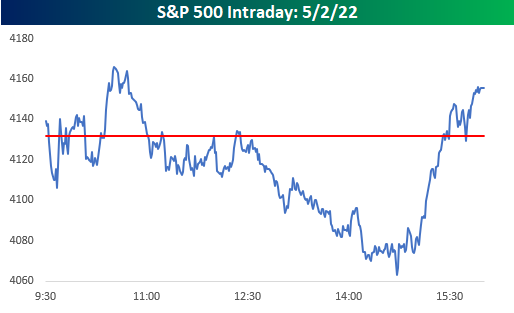 Reversals like Monday’s always feel great in the moment, but do they really mean anything in terms of the market’s future direction?  Since the early 1990s, yesterday was just the 17th time that the S&P 500 was down at 3 PM but rallied by more than 1.5% in the final hour of trading to finish the day in positive territory.  The two most recent occurrences were this past January (1/24) and before that December 2018 (12/27/18).  After that, you have to go back to October 2011 to find the most recent occurrence. The chart below shows the S&P 500 on a long-term basis going back to 1995, and we have included red dots to show the day of every prior reversal like yesterday when the S&P 500 was down at 3 PM, rallied more than 1.5% in the last hour, and then closed in positive territory.

Looking at the various occurrences, there appears to be little in the way of a clear trend.  While there were multiple occurrences during the dot-com bust and the financial crisis, there were also a number of occurrences just after the March 2009 low and in the years since. 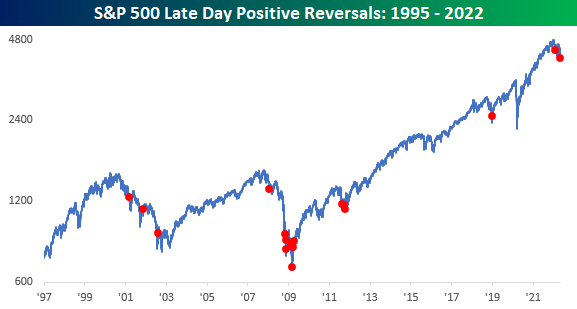