“I have thought it my duty to exhibit things as they are, not as they ought to be.” – Alexander Hamilton

We’ve just received a slug of economic data, and it was a mixed bag.  Durable Goods Orders saw a pretty big miss at the headline level (-1.3% vs 0.85) but were slightly better than expected after stripping out Transportation (1.0% vs 0.7%).  Jobless claims came in better than expected on both an initial (406K vs 425K) and continuing basis (3,642K vs 3,680K).  The second look at Q1 GDP was unchanged at 6.4%, but the Price Index and Core PCE both came in higher than expected.

Despite the stronger than expected inflation data, futures have actually seen a modest bounce following the data.

Read today’s Morning Lineup for a recap of all the major market news and events including a recap of some notable earnings reports, major economic data out of Europe, and the latest US and international COVID trends including our vaccination trackers, and much more.

The charts below come from page seven of our Morning Lineup and show the daily COVID case trends for various regions around the world.  The country that stood out more than any others in recent weeks has been India, but the daily number of new cases has nearly been cut in half as the surge part of the recent wave burns itself out.  Looking at other major countries/regions, most have been on the decline, but there has been a modest uptick in cases in both Brazil and Chile although neither country is close to its highs from the Spring. Meanwhile, here at home the daily number of new cases continues to shrink and is now below 100 new daily cases per million. 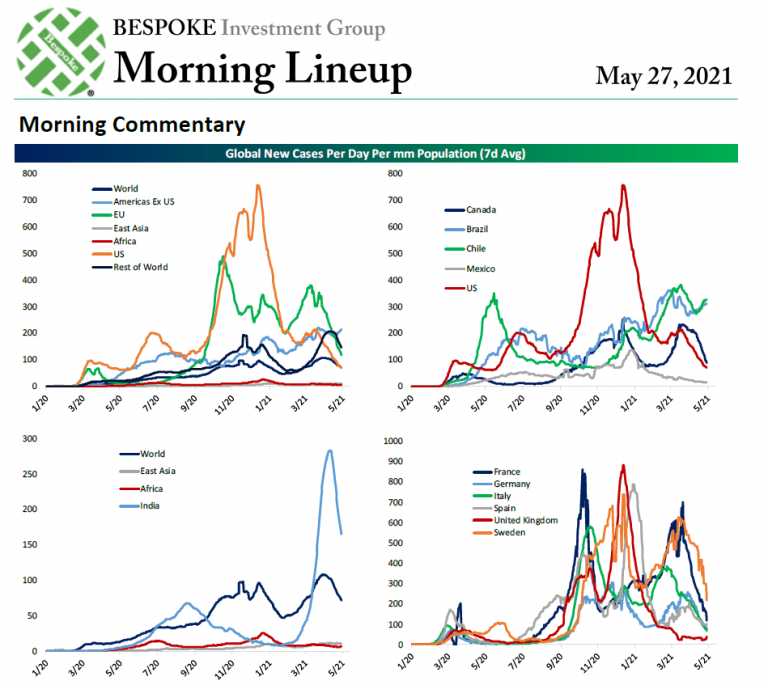