“Someday neither AI nor us will be able to tell whether we are in a virtual or physical world.” – Jensen Huang

We’ll be honest, based on the way markets have been trading the last couple of months, we would have expected that if the 7th largest stock (NVIDIA) in the Nasdaq 100 was trading 5% lower in reaction to earnings, that futures for the index would also be lower.  Right now, futures are actually trading about 0.4% higher. Is this real?

In addition to the positive tone in futures, there’s also some major M&A news with Broadcom (AVGO) reaching a deal to acquire VMware (VMW) in a cash and stock deal valued at $61 billion in what would be one of the largest tech mergers of all time.  On the one hand, a bull would point to this transaction as a sign that companies are finding value in the market after the plunge over the last five months.  On the other hand, as recently as February, VMW’s stock was right around the $142.50 price the company agreed to sell itself at today, so does that indicate that management expects limited upside for the industry going forward?

The Energy sector hit another new 52-week high yesterday further cementing its lead as the top-performing sector in the S&P 500.  Given the rally over the last year, it’s pretty hard to believe that the Energy sector is still more than 10% below its record high back in 2014. 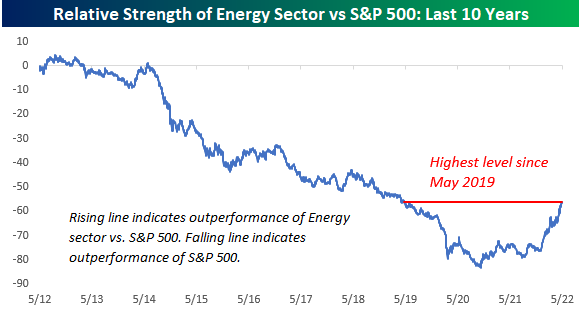