“Personally, I’d rather have bitcoin than a bond.” – Ray Dalio

Yesterday may have been a day you wanted to own bitcoin over a bond but not today.  After one of its best days in years, bitcoin is down over 5% as of now.  Right now, it’s flopping around trying to regain its footing and establish a new baseline after last week’s crash.  In other news, equity futures are higher, and those 10-year US Treasures that no one wants to own are rallying to push the yield back below 1.6%.

In company-specific news, we’ve seen some positive news related to the re-opening this morning as both United (UAL) and Hawaiian Airlines (HA) had positive comments regarding passenger traffic levels.

Read today’s Morning Lineup for a recap of all the major market news and events including a recap of some positive economic data out of Asia and Europe and the latest US and international COVID trends including our vaccination trackers, and much more.

After multiple attempts at moving back above its 50-DMA, the Nasdaq was finally able to trade and close above that level yesterday as mega caps in the index provide leadership.  Call it a moral victory for the index on its attempted journey back to record highs. 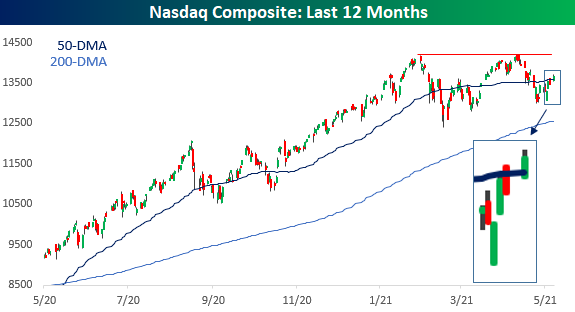 Today looks like it may be the Russell 2000’s turn to make a run and stay above its 50-DMA.  Including yesterday, the small-cap index has made three attempts to trade above its 50-DMA, and each time, it sold off intraday day closing below that level.  In yesterday’s email, we noted that breadth in the Nasdaq has been weak as smaller issues in the index have acted as a drag on the index.  The fact that the Russell 2000 hasn’t been able to trade and close above its 50-DMA provides another illustration of that relative weakness.  If the Russell can finally reclaim its 50-DMA today, though, that would help shift to a more bullish narrative for small caps heading into the holiday weekend. 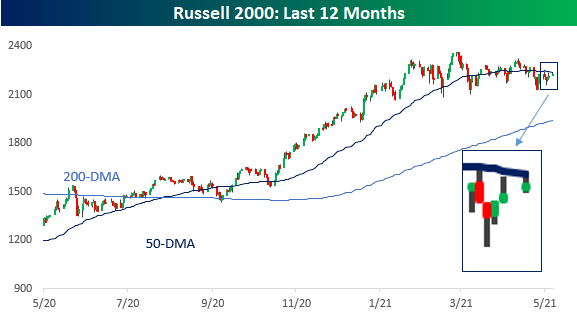