“The typical trader wants to be right on every single trade. He is desperately trying to create certainty where it just doesn’t exist.” – Mark Douglas

Futures are modestly lower heading into the second to last trading day of the week, and the just-released economic data has been a modest disappointment.  Initial Jobless Claims came in slightly lower than forecasts (444K vs 450K), but continuing claims were modestly higher (3.751 mln vs 3.63 mln).  The Philly Fed Manufacturing report came in at 31.5, which is generally a strong number, but relative to April’s reading (50.2) and expectations (41.0), it was a disappointment.

Read today’s Morning Lineup for a recap of all the major market news and events including a recap of overnight economic and earnings data, as well as the latest US and international COVID trends including our vaccination trackers, and much more.

After big losses early on in the session, yesterday almost finished off as a major reversal day.  The Nasdaq came up just shy of finishing the day in positive territory, but the Philadelphia Semiconductor Index (SOX), which traded down over 2% early on in the session, finished the day up just shy of 2%.  Yesterday’s reversal also began just as the SOX was testing its lows from last week and the bottom of its six-month trading range.  We should know soon enough whether this range will hold. 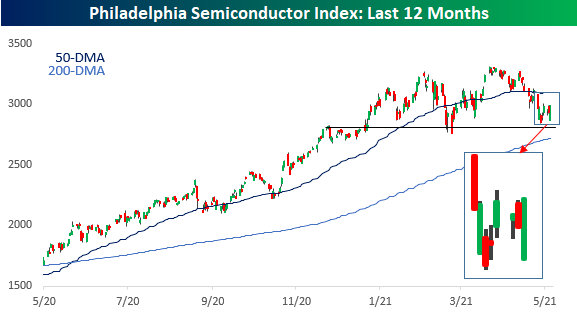