“Take a simple idea, and take it seriously.” – Charlie Munger

Futures were modestly positive for most of the overnight session but have weakened as we get closer to the opening bell.  After a day like last Friday, it’s all but guaranteed that we’re likely to see continued volatility today.  As they say around the roulette wheel, “Round and round it goes. Where it stops nobody knows.”

Economic data at 10 AM will also be a big factor in where the market trades today, but the looming Fed meeting mid-week will be on everyone’s mind.  While the current rate hiking cycle has already been called the most aggressive in a generation, it’s important to remember that the Fed has only hiked 25 bps so far.  That will change this week as a hike of at least 50 bps is pretty much fully priced in.  The most ironic aspect of it all, though, is that after months of delay, the Fed is starting to ramp up the pace of hikes just after a negative Q1 US GDP print, slower than expected economic data, and even weaker data in China and Europe.

In today’s Morning Lineup, we recap overnight events in Asia and Europe (pg 4), economic data in China and Europe (pg 5), as well as a recap of PMI data for April (pg 6).

It’s often said that the stock market is one of the only places where investors don’t like bargains.  In other words, when the market is rallying investors love stocks, but when it declines, investors can’t get out fast enough.  Warren Buffett is one investor who has bucked the conventional approach of many investors and consistently used weakness as an opportunity.  His actions in Q1 were a perfect example.  In this weekend’s annual meeting, one slide that stood out was the breakdown of Berkshire Hathaway’s equity purchases during the quarter. Of the nearly $52 billion in purchases made by Berkshire in Q1, just under 80% of it occurred during the highlighted period in the chart (from 2/21 through 3/15) when prices in the quarter were at their weakest.

It’s also worth keeping in mind what Berkshire was buying during the quarter.  It wasn’t growth stocks that were down the most. Instead, it was mostly in stocks with reasonable valuations like Chevron (CVX). Occidental (OXY), Alleghany (Y), HP (HPQ), and even Apple (AAPL). 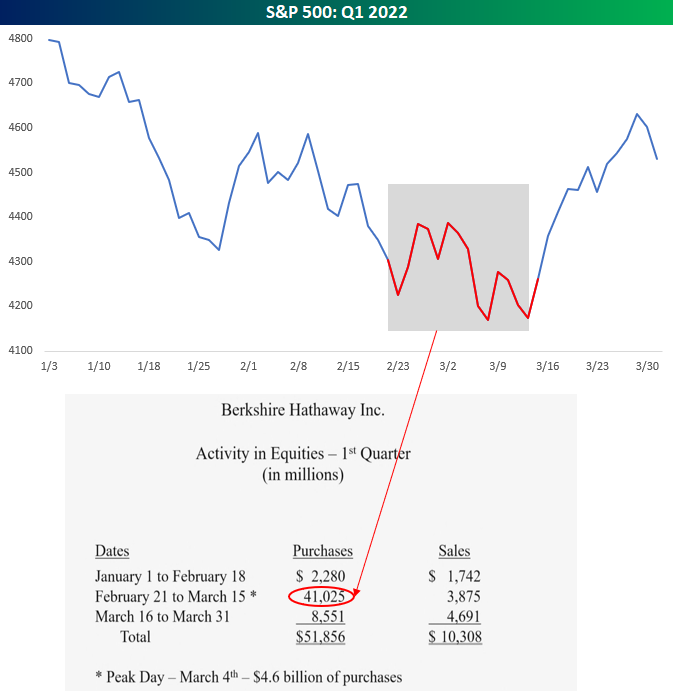