“It is never too late to be wise.” – Daniel Defoe, Robinson Crusoe

After yesterday’s plunge, bargain hunters are nowhere to be found this morning as futures are lower again and indicating losses of nearly 1% at the open.  Markets in Asia and Europe were weak overnight but not as bad as it was here yesterday.  Treasury yields are lower this morning as investors start to worry more about rising recession risks, and crude oil is lower.  One bright spot this morning is bitcoin which is trading up nearly 1%.

When the levels of uncertainty in the economy reach levels like they are at now, you get days like the last two where the S&P 500’s daily advance/decline (A/D) reading exceeds +400 one day and then falls below -400 the next.  Like the CEOs of two of the nation’s largest retailers, investors have no idea what to make of the current environment.

Yesterday was just the 22nd time since 1990 that the S&P 500 had an ‘all’ day (S&P 500 daily A/D reading above +400) immediately followed by a ‘nothing’ day (S&P 500 daily A/D reading below -400).  Of those 21 prior occurrences, none occurred before 2007.  The chart below shows where each of those back-to-back readings occurred.  While there have only been 22 occurrences over the last 30 years, two of them have now happened this month!  Overall, though, these back-to-back readings have generally occurred during pullbacks and are an indication of extreme volatility and uncertainty. 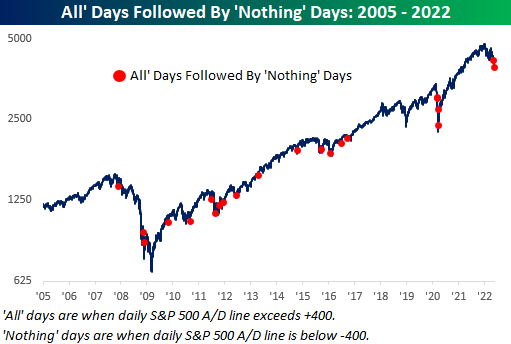 Earlier this year when the market was falling, ‘all or nothing’ days were notably missing.  The reason was mostly due to the fact that the Energy sector was moving in the opposite direction of the broader market, so when stocks rallied, the energy sector declined and vice versa.  In recent weeks, though, we’ve seen the pace of all or nothing days pick up notably.  In just the last 20 trading days, there have been eight all-or-nothing days, which is far from a record but certainly at the high end of the historical range. 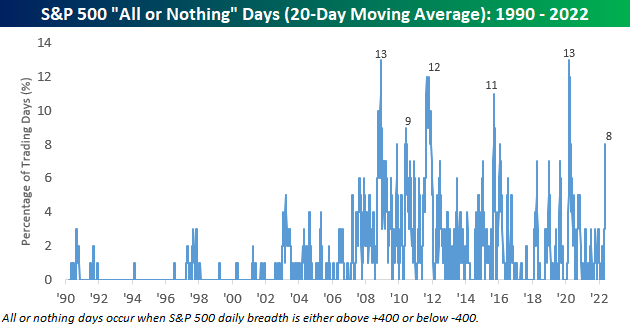