After an impressively strong start to the week yesterday, where equities opened higher and kept going from there, today is looking like the wrong kind of turnaround Tuesday for bulls.  Futures are modestly lower as investors digest the big gains from yesterday.  Walmart (WMT) reported much better than expected results as consumers stocked up on the essentials during the lockdown sending comp sales up by 10%!  While there are still a number of reports left on the calendar, WMT’s report marks the unofficial end to what was a much better earnings season than most expected.

On the economic front, Housing data was mixed as Housing Starts were weaker than expected while Building Permits topped expectations.

Be sure to check out today’s Morning Lineup for a rundown of the latest stock-specific news of note, economic sentiment around the world, the latest global and national trends related to the COVID-19 outbreak, and much more.

In yesterday’s rally, there were two positive developments from a charting perspective spanning both the large and small-cap universe. Starting with large caps, after two tests of the 2,950 range, the third time was the charm yesterday as the S&P 500 appears to have cleared resistance from late April and early May. 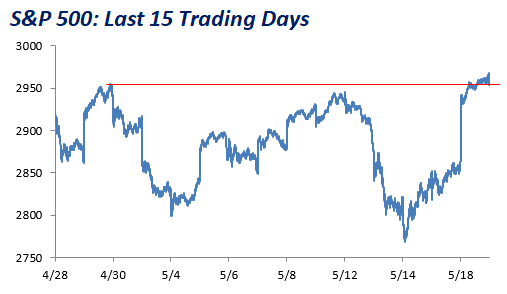 The pattern for small-caps doesn’t look quite the same.  The Russell 2000’s early May rally didn’t test the highs from late April, and when it pulled back it actually made a lower low.  After yesterday’s rally, though, that downtrend from the April high appears to have broken.  With a market cap that is much less the combined market cap of Microsoft (MSFT) and Apple (AAPL), it won’t take much for small caps to catch a bid when sentiment finally does start to shift. 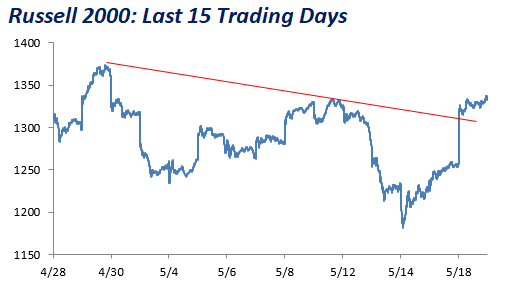