After inflation was the theme last week, this week housing takes center stage.  Yesterday it was NAHB sentiment and today we get reports on Housing Starts and Building Permits.  Levels for the month of April are expected to come in roughly the same as in March, but we’ll be watching for any signs of a slowdown due to the rising costs of inputs.  Outside of these two reports, there is no other data on the docket.

In earnings news, Walmart (WMT) marked the unofficial end to earnings season with a stellar report, and unlike a lot of other companies that have reported positive results and sold off, so far WMT is actually trading higher.

Read today’s Morning Lineup for a recap of all the major market news and events including a recap of overnight economic and earnings data, as well as the latest US and international COVID trends including our vaccination trackers, and much more.

The saying goes, ‘better late than never”, but when it comes to taxes and the delayed deadline for Federal payments most would prefer “better never than late”. Due to the one-month delay and the fact that the 15th of May fell on a Saturday, yesterday (5/17) was the Federal Tax deadline, so if you haven’t filed your return or an extension yet, you are now officially late.  You may not be aware, but when it comes to the Federal tax deadline, the last two decades have seen a relatively clear trend of short-term weakness in equities leading up to the tax deadline and strength after. 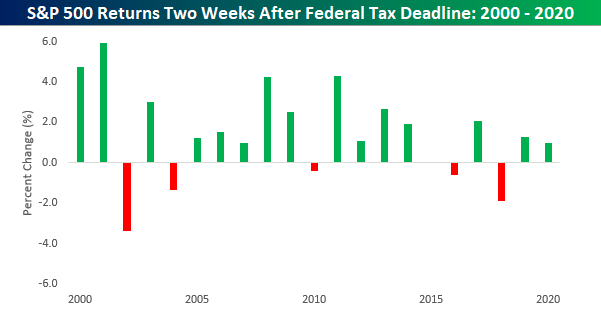