“Sometimes buying early on the way down looks like being wrong, but it isn’t.” – Seth Klarman

It’s been a weak morning for equities as futures trade near their lows of the morning.  Economic data out of China generally missed expectations, and that has set the negative tone heading into the new workweek as speculative assets like crypto and lumber futures are under pressure.

Read today’s Morning Lineup for a recap of all the major market news and events including a recap of overnight economic data, as well as the latest US and international COVID trends including our vaccination trackers, and much more.

It’s been quite a run for value stocks.  Over the last six months, the S&P 500 Value index has rallied more than 22% while its growth counterpart has only rallied half of that amount (11.7%) during that same span.  With a performance gap between the two of 11 percentage points, the spread is near historically high levels, and it was even wider earlier last week.

The chart below shows the rolling six-month performance gap between the S&P 500 Value and Growth indices going back to the mid-1990s.  At last week’s high of 17.5 percentage points, the spread between the two indices is the widest in just under 20 years (June 2001).  It got close to current levels in the months coming out of the financial crisis but peaked just shy of last week’s high.  While the spread is currently extreme now, keep in mind that it was at record extremes in the other direction last September, so value stocks are basically just catching up to growth. 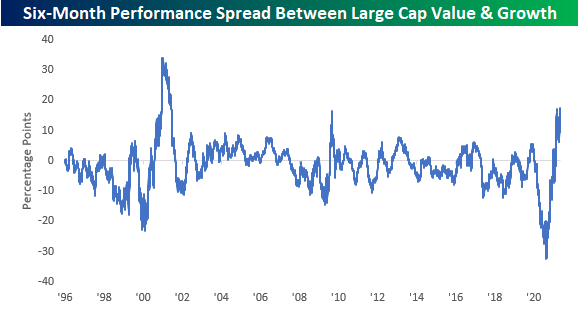