It looks like it’s going to be another bad day for the bulls today.  Futures have been deteriorating quickly this morning as jobless claims came in significantly higher than expected (2.98 million vs 2.5 million estimates).  After a period of weeks where optimism over re-opening took the spotlight, sentiment has shifted to the idea that even as the economy re-opens, the road to recovery won’t be a smooth one.

Be sure to check out today’s Morning Lineup for a rundown of the latest stock-specific news of note, Japanese economic data, the latest global and national trends related to the COVID-19 outbreak, and much more.

After the second bad day in a row for US equities on Wednesday, all we’ve been hearing today is how Fed Chair Powell’s comments and David Tepper’s interview with CNBC regarding the market’s valuation were responsible for the decline.  It sounds like a good explanation, but in the words of Warner Wolf, “Let’s go to the videotape.”

The chart below shows the S&P 500’s intraday performance on Wednesday.  In looking at this chart, keep in mind that Powell’s speech started at 9:00 AM, or 30 minutes before the market open.  With that in mind, we can see that the S&P 500 opened lower but rebounded in the first hour of trading.  Within an hour of the open, however, the S&P 500 was actually up on the day.

The S&P 500’s time in the black didn’t last long, though, because, at 10:33 AM, the President tweeted some bellicose comments regarding China and the trade deal.  At that point, the rally was stopped in its tracks, and the S&P 500 immediately moved lower.  Tepper’s comments at noon didn’t help matters, but by the end of the day, the S&P 500 finished right where it was trading before Tepper appeared on CNBC.

In other words, even though yesterday’s declines were attributed to Powell and Tepper, the S&P 500 actually traded higher after Powell spoke and finished the day right where it was trading before Tepper made his comments regarding the market’s valuations.  The most significant turning point of the morning, though, came right after President Trump tweeted about the China trade deal, but that has barely been mentioned as a catalyst for the decline. 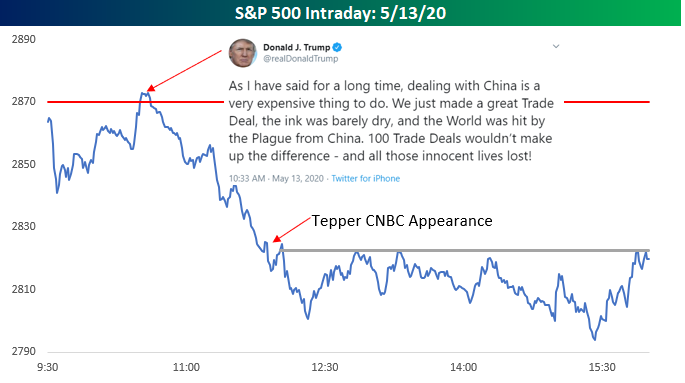