“I’d be a bum on the street with a tin cup if the markets were always efficient.” – Warren Buffett

Futures are higher this morning, so the only question investors have at the moment is, what time does the sell-off begin?  Treasury yields are sharply higher across the board this morning as the 10-year yield is back above 2.9%.  Crude oil is up over 1%, while gold declines to around $1,800 per ounce.  In the crypto space, we’ve seen some stabilization as bitcoin is trading back above $30K.

On the COVID front, there are some signs that Shanghai will start lifting its lockdown measures at the end of next week, and the government has also denied rumors that similar lockdowns are in store for Beijing.

There was some good news on the economic front as Import Prices were unchanged versus expectations for an increase of 0.6%.  The only other report on the calendar is the Michigan Sentiment at 10 AM.

In today’s Morning Lineup, we recap the continued developments in the crypto space (pg 4), overnight economic data out of China and Europe (pg 5), and a lot more.

Barring an epic rally on the final trading day of the week, both the S&P 500 and Nasdaq will put in their sixth straight week of losses today.  In the case of both the S&P 500 and Nasdaq, it will be tied with four other periods for the longest weekly losing streak since 2001.  Below we show historical weekly losing streaks for the Nasdaq since 1971.  While there have been a number of streaks that have been as long, just five have been longer, and only one (1973) lasted longer than seven weeks. 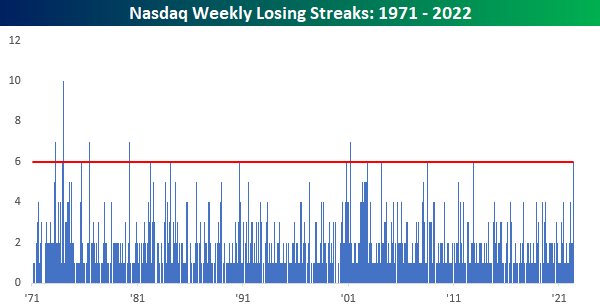 Even more notable than the fact that the Nasdaq has been down for six weeks in a row is the fact that every down week in the last six has been a decline of at least 1.5%.  In the Nasdaq’s entire history, there have only been four other periods where the Nasdaq was down for six or more straight weeks and every one of those weeks was a decline of at least 1%.  Three (1973, 1980, and 2001) lasted seven weeks, while the streak in 1990 lasted six weeks.  In the Nasdaq’s history, losing streaks of this magnitude have been extremely uncommon. 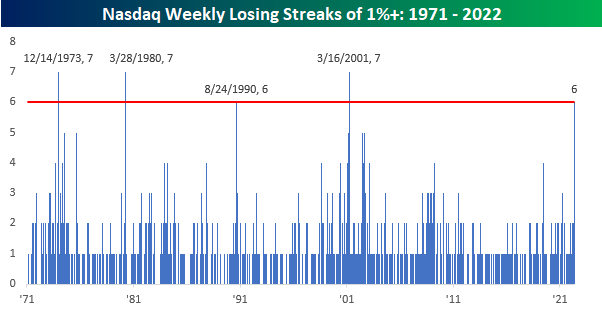