“Inflation is not all bad. After all, it has allowed every American to live in a more expensive neighborhood without moving.” – Alan Cransto

Inflation has its name in lights this morning as gas prices surge across the country as the Colonial Pipeline outage threatens energy supplies on the East Coast of the United States.  April CPI was just released, and while economists’ forecasts called for a m/m increase of 0.2% at the headline level and 0.3% on a core basis, the actual readings came in at 0.8% and 0.9%, respectively.  The headline reading was the biggest gain since 2009, while the core reading hasn’t been this high since the early 1980s.  On a y/y basis, headline CPI was 4.2% (highest since 2008) and core CPI was 3.0% (highest since 1996).  While the high levels were expected, not many were expecting them to be this high.

Read today’s Morning Lineup for a recap of all the major market news and events including a recap of overnight earnings reports and economic data, a look at some key market charts from Asia and Europe, EZ Industrial Production, as well as the latest US and international COVID trends including our vaccination trackers, and much more.

Technology may have received the most attention for this week’s declines, but it has been far from alone.  The chart below summarizes the week-to-date performance of the S&P 500 and each of the eleven sectors through Tuesday’s close.  Over the last two days, Technology isn’t even the worst performer.  That title belongs to Consumer Discretionary which is down 2.86%.  Not far behind, Technology is down 2.77%, while Energy is down 2.61%.  The only other sector down more than the S&P 500 is Communication Services (-2.43%).  On the upside, or more accurately, the less bad side, Materials, Consumer Staples, and Utilities are all down less than 0.20%. It’s interesting to see that the two commodity-related sectors – Energy and Materials both have vastly different returns WTD. 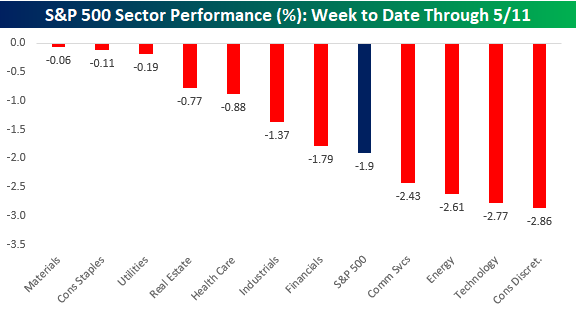