“The greatness of a man is not in how much wealth he acquires, but in his integrity and his ability to affect those around him positively.” – Bob Marley

The hype surrounding today’s CPI report has reached levels we don’t know if we’ve ever seen for another similar report. Whether it comes in much better or worse than expected, we can pretty much guarantee that like every other report that gets so hyped up, no one will even remember it a few days from now.  Outside of the CPI report, energy inventories will be released at 10:30, and given some of the concerns regarding diesel supplies, this report has the potential to be a market mover.

After a back and forth session yesterday, futures are higher again this morning but whether these gains hold or not will largely depend on how CPI comes in relative to expectations. The rally in US futures comes on the heels of a 1%+ rally in major European markets even after German CPI increased at its fastest year/year pace since 1974 (7.4% which was in line with expectations).

Heading into today’s CPI report, treasury yields are lower across the curve, the dollar is lower and WTI is up over 4% and back above $100 to $104 per barrel.

Inflation running at multi-year highs for the last several months should surprise no one.  What sticks out to us is the fact that economists have been so behind the curve in catching up to it.  The chart below shows the 24-month rolling number of monthly headline CPI reports coming in lower than expected.

Leading up to today’s report, just three headline CPI reports in the last 24 months surprised to the downside, and the last weaker than expected report was all the way back in September.  Before that, you have to go back to the October 2020 report.  The current rolling 24-month total of three ranks as the lowest number of weaker than expected reports since at least 2000.  There’s been no shortage of criticism for the Federal Reserve and how it has failed to get ahead of the surge in inflation, but economists haven’t fared much better. 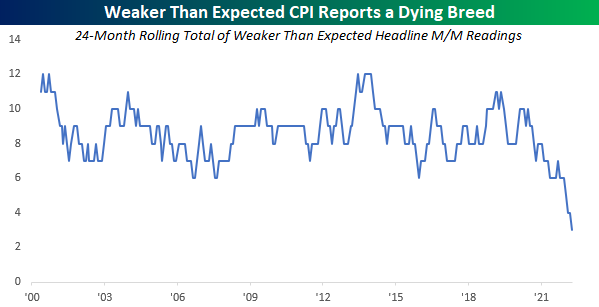