“Earnings don’t move the overall market, it’s the Federal Reserve Board… focus on the central banks, and focus on the movement of liquidity… most people in the market are looking for earnings and conventional measures. It’s liquidity that moves markets.” – Stanley Druckenmiller, 2015.

The prospects for a turnaround Tuesday aren’t looking particularly positive this morning.  What was already a weak picture in equity futures has turned even worse as hedge fund manager Stan Druckenmiller just appeared on CNBC with a rather dour outlook on the future prospects of the economy and markets following a just published WSJ op-ed as well.  While his media appearances are typically more bearish than bullish, some of his points are certainly valid and have clearly caused a more cautious mood heading into the opening bell. While equity futures are sharply lower, we’ve seen little movement in treasuries or gold.  Crude oil and bitcoin are both moderately lower.

Read today’s Morning Lineup for a recap of all the major market news and events including a recap of overnight earnings reports and economic data, including updates on the ZEW economic surveys and NFIB sentiment, as well as the latest US and international COVID trends including our vaccination trackers, and much more.

With today’s weakness in futures, the Nasdaq looks to continue leading to the downside, and the technical picture looks weaker this morning than it did heading into the week.  After failing to take out its high from earlier in the year in late April, the Nasdaq has been under heavy selling pressure ever since.  In yesterday’s sell-off to start the week, not only did the Nasdaq break below its 50-DMA, but it also broke its short-term uptrend from the March lows. 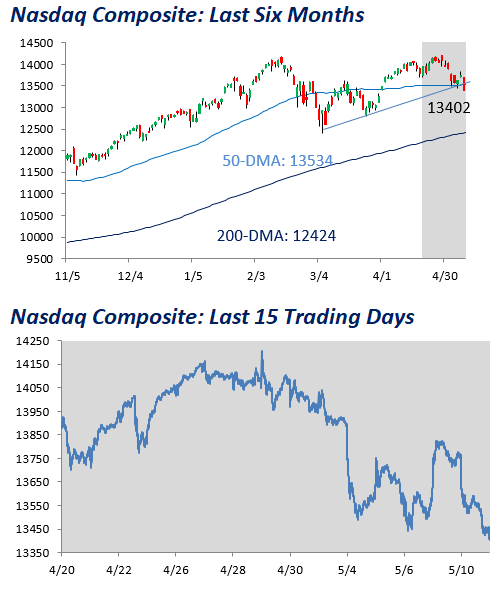