With US markets closed for Good Friday tomorrow, it was looking like Corona Friday was coming a day early this week as US futures were indicating a decline of 1% at the open.  Jobless claims were just released and came in at a level of 6.606 million versus forecasts of 5.0 million.  That’s off last week’s record high, but still much higher than expected.

Right in sync with the release of jobless claims, the Fed is now just out with an announcement of adding $2.3 trillion in new loans to support the economy. Say what you want, but when the history of this is written, no one will be able to accuse the Fed of not going big. In response to the Fed’s announcement, futures have erased all of their declines and are now flat to slightly higher.

Read today’s Bespoke Morning Lineup for a discussion of the latest trends and statistics of the outbreak, an analysis of groups driving the rally in Europe this week, and a big drop in Machinery Tool Orders in Japan. 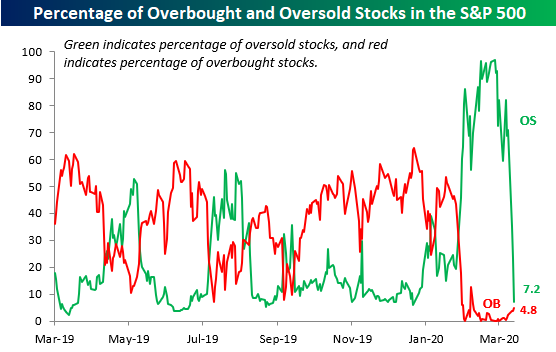