“The discipline of writing something down is the first step toward making it happen.” – Lee Iacocca

CEOs of two of the largest companies in the US are making headlines for recent comments this morning; one in a blog post and the other in his firm’s annual letter.

First, despite disagreement even within the Democratic caucus, Amazon CEO Jeff Bezos came out in support of the Biden Administration’s plan to boost investment in US infrastructure.  Realizing the costs involved in such a plan, the Amazon founder noted in a blog post that “we’re supportive of a rise in the corporate tax rate.”  While cynics would say that AMZN doesn’t pay corporate taxes so why should it care, we would note that the company has in recent years seen its tax bill go up as it has become more profitable.  The rate is still very low, however, as in 2020, the company’s effective tax rate was 9.4%.

The second CEO making headlines this morning is JP Morgan Chase CEO Jamie Dimon.  In the bank’s annual letter, Dimon expressed some concerns about potential inflation due to stimulus hitting the economy as it is already starting to rebound.  That could lead to higher interest rates ‘making things a little worse’.  In terms of equity valuations, he noted that they are high by ‘almost all measures, excect interest rates’.  Therefore, higher interest rates to combat inflation could be problematic for the stock market.  The high valuations, though, could be justified if the multi-year boom in the economy that he expects ‘could easily run into 2023’ comes to fruition.

Read today’s Morning Lineup for a recap of all the major market news and events including a recap of Composite PMI data for March, US and international COVID trends as well as our series of charts tracking vaccinations, and much more.

After a strong start to the quarter in its first two trading days, US equities took a breather yesterday from what was and still is an extreme overbought condition.  As shown in the chart below, the S&P 500 was more than 2.5 standard deviations above its 50-day moving average heading into yesterday’s trading, which was not only the most extreme overbought reading in the last year but also the most overbought level since February 2017.  Extreme overbought readings don’t mean that the market has to immediately sell off, but it often suggests that a rally is due for a pause. 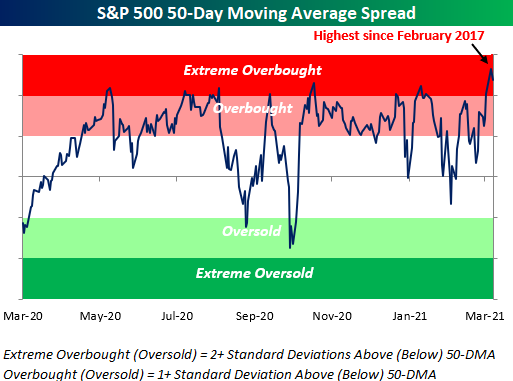