“How did you go bankrupt?”
“Two ways. Gradually, then suddenly.” – Ernest Hemingway, The Sun Also Rises

With little in the way of economic data today and earnings season not really kicking off until next week, it’s a quiet morning.  Futures are modestly lower even as the 10-year yield is back below 1.7%.  After being closed yesterday, European markets are back open this morning and making up for lost time by rallying in reaction to the strength in the US yesterday.

In SPAC news, NFTs may be the hot trend in the collectible space, but traditional baseball cards are the center of attention this morning as Topps has announced a deal to go public in a merger with Mudrick Capital.  The deal for the maker of cards for baseball, most other major sports, and who can forget- Garbage Pail Kids- will be valued at $1.3 billion.  You can also bet that at some point, they will be moving into the NFT space. Perhaps the most telling aspect of the SPAC environment these days is the fact that in an interview with Topps Chairman Micheal Eisner, he stressed that the company will be operating as a ‘real’ company.

Read today’s Morning Lineup for a recap of all the major market news and events including the latest Australian Central Bank decision, a recap of SENTIX investor sentiment surveys for April, US and international COVID trends as well as our series of charts tracking vaccinations, and much more.

The market may be quiet this morning, but there have already been plenty of fireworks to start the second quarter.  While the two 1% gains came four calendar days apart, this is the first time that the S&P 500 has kicked off a new quarter with back-to-back 1%+ gains since Q2 2009!  As shown in the table below, in the post-WWII period, there have only been seven other quarters that kicked off with back-to-back gains of at least 1%. 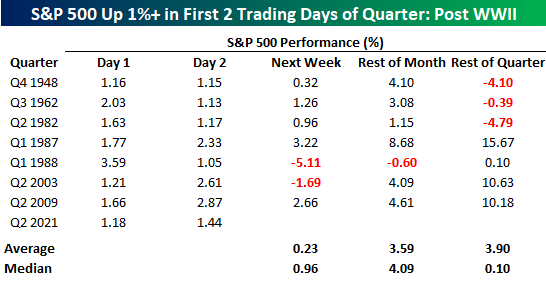