Futures were higher overnight but started to lose steam right around the time Europe opened for business. Technology is holding up a bit better, though, following strong earnings reports from Microsoft (MSFT) and Facebook (FB) among others.  Jobless claims were just released, and while economists were expecting a reading of 3.5 million, the actual level of claims was higher at 3.839 million.

Be sure to check out today’s Morning Lineup for a rundown of the latest major earnings reports from the US and Europe, European economic data, and the latest trends in the COVID outbreak on a global, national, and state by state basis.

The trading range picture of major US indices from our Trend Analyzer tool shows a number of interesting trends.  We’ll just start off at the top.  Take the Nasdaq 100.  After Wednesday’s gain, the QQQ ETF is actually up over 3% YTD and nearly 9% above its 50-day moving average.  With that type of spread versus the 50-DMA, the Nasdaq 100 is the only major US index that is at overbought levels (>1 standard deviation above its 50-DMA).  The table below is sorted by the degree to which each index is trading relative to its 50-DMA (measured in standard deviations), and it’s no surprise that the top is loaded with large caps, and generally speaking, the further down you move the list, the smaller in market cap the indices get.  On a YTD basis as well, the indices that are further above their 50-DMAs are doing better YTD while the smaller market cap indices are down the most.

While large caps have been outperforming on a YTD basis, in the last five days, the complete opposite has been the case.  Indices representing small and mid-cap indices are all up between 10% and 15% or more than double their large-cap peers.  Small caps were hit the hardest on the way down on concerns that they wouldn’t be able to withstand the economic calamity as well large-caps, but optimism that economic activity will come back online sooner than expected has really breathed some life into the sector. 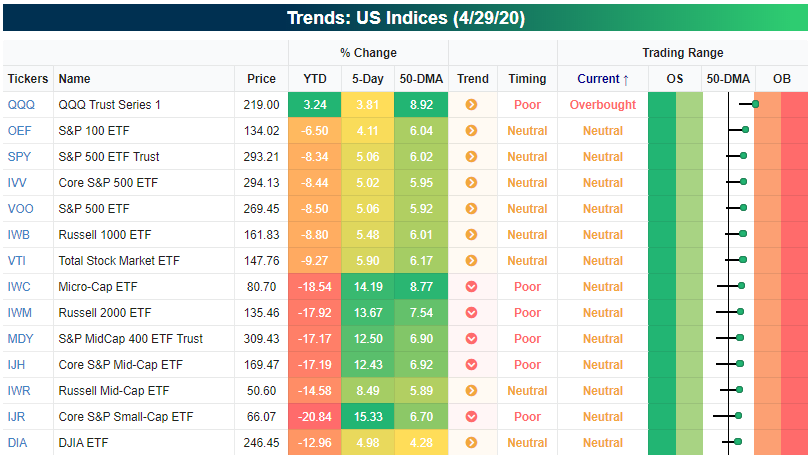