Wow. That was a pretty bad jobs report.  While economists were only expecting a 100K decline in non-farm payrolls (NFP) for March, the actual decline was much sharper at -701K.  Going back to WWII, there have only been seven other reports that were weaker.  Making matters worse is that the numbers are only going to get worse next month.  Given the weakness, you might expect futures to be sharply lower on the news.  Instead, they are actually off their lows and down less than half of one percent.  Not bad for a Friday in 2020!

Read today’s Bespoke Morning Lineup for a discussion of the latest trends and statistics of the outbreak, conditions in the corporate credit market, and some truly weak economic data points out of Europe.

It looks like today is shaping up to be another one of those “Corona Fridays”.  In the 13 Friday’s so far in 2020, the S&P 500 has traded in the red on ten of those days.  Granted, one of the up days was one of the best days in the S&P 500’s history, but even including that gain on of all days Friday the 13th in March, the S&P 500’s average change on Friday’s so far this year has been a decline of 0.43% (median: -0.82%).  Market performance on Fridays so far this year has been a lousy way to start the weekend, but look on the bright side, at least the market is closed for Good Friday next week. 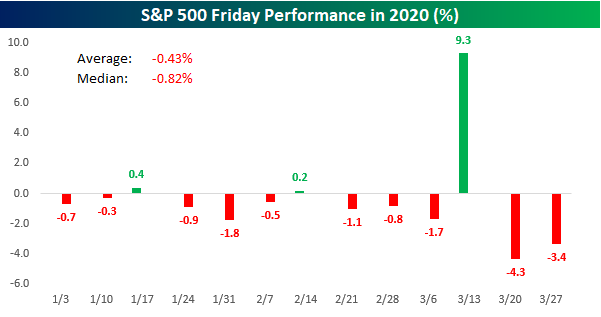