“I didn’t know what Facebook was, and now that I do know what it is, I have to say, it sounds like a huge waste of time.” – Betty White

“Toxic” “Divisive” “Waste of Time” “Useless”  These are just some of the adjectives we’ve heard to describe the Facebook (FB) platform over the last 24 hours, and they’ve come from analysts and investors who have nothing but positive things to say about the company’s profitability and business model.  Facebook proved that last night with a blowout earnings report that surpassed even the most optimistic of forecasts. While people may say they use Facebook’s services less and less, the numbers tell an entirely different story.  People hate Facebook so much that they can’t get enough of it.

In economic news this morning, Jobless Claims were roughly inline with forecasts, GDP came in modestly weaker than expected, but data on prices surged 4.1% compared to forecasts for an increase of just 2.6%.

Read today’s Morning Lineup for a recap of all the major market news and events including the biggest overnight events, some key earnings reports, economic data from around the world, as well as the latest US and international COVID trends including our vaccination trackers, and much more.

Facebook is on pace to gap up over 7.5% this morning, and based on our Earnings Explorer that would rank as the 10th largest upside gap in the stock in reaction to earnings since its IPO in 2012 and the 14th upside gap of 5%+ in reaction to earnings.  Two of those 5%+ gaps have actually occurred in the last year (4/29/20 and 7/30/20).  Of the prior 13 5%+ upside gaps, FB has continued higher from the open to close just four times with the largest gain coming in July 2013 when it tacked on an additional 2.4% finishing the day up just under 30%!  Of the days where FB gave up ground during the trading session, declines were typically modest with the largest giveback being 3.7% in October 2012. 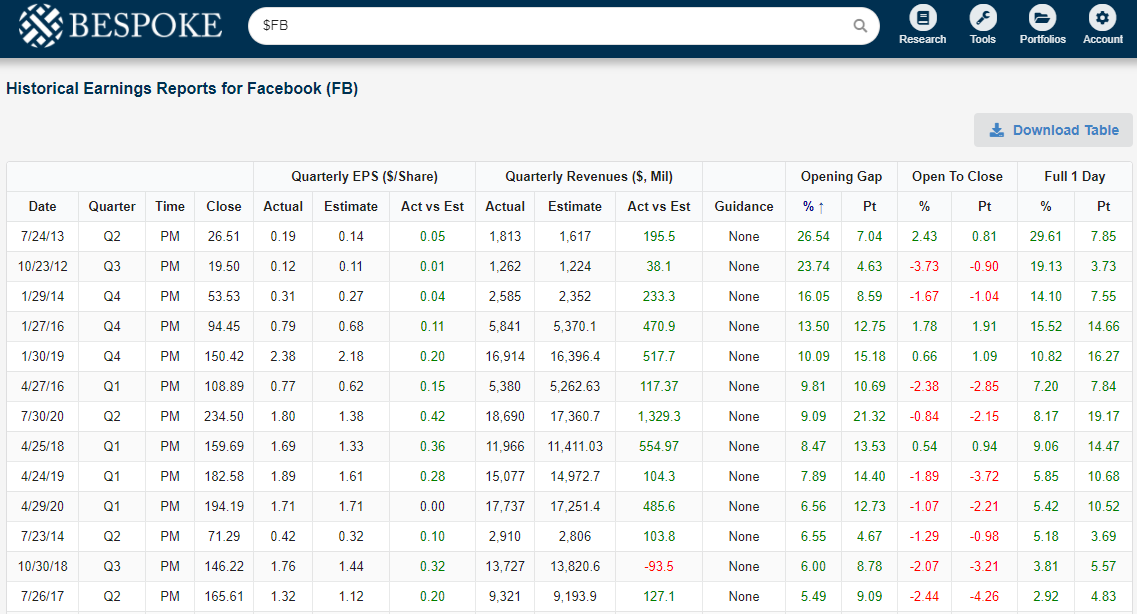