Q1 GDP isn’t even going to be the ‘bad’ quarter of the COVID outbreak, but while economists were expecting GDP to drop 3.9%, the actual decline was even worse than expected at -4.8% and the worst quarter for economic growth since the depths of the recession in Q4 2008.  Even worse, Consumption was even weaker, falling 7.6% for its worst quarter since Q2 1980.

While that type of news would be expected to have a negative impact on the market, at the same time that GDP was released, data regarding trials of Gilead’s (GILD) Remdesivir in the treatment of COVID showed positive results and pushed futures even higher.

Be sure to check out today’s Morning Lineup for a rundown of the latest earnings reports, Korena economic data, and the latest data on the COVID outbreak.

While the S&P 500 wasn’t able to hold onto its gains yesterday, the Russell 2000 still managed to finish the day up over 1% for the fifth straight trading day.  That’s quite an impressive streak, and in the history of the Russell 2000, this has only happened three other times – October 2008, January 2000, September 2009, and now. Is it finally time for small caps to shine? 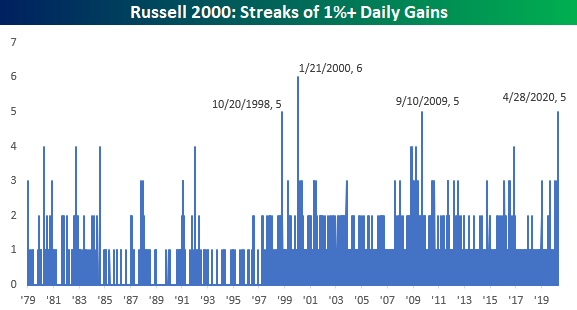