The S&P 500 is looking to make it three in a row today.  Not just three positive days in a row, but three straight days of gains of at least 1%.  There’s still an entire trading day left to go, so given the positive bias at the outset, today is a day where we don’t want Tuesday to live up to its ‘turnaround name’.

On the earnings front, keep in mind that the five largest companies in the S&P 500 are set to report over the next three days.  Here is a write-up we did highlighting their historical Q1 earnings trends.
Five Largest Market Caps Report This Week — AAPL, AMZN, FB, GOOG, MSFT

Be sure to check out today’s Morning Lineup for a rundown of the latest earnings reports, the latest moves in crude oil, economic data out of Japan and South Korea, and the latest data on the coronavirus outbreak.

Yesterday marked a key milestone in the equity market’s rally off the late March lows.  You may have to squint to see it in the chart, but it was the first time since 2/21 that the S&P 500 opened above its 50-day moving average and stayed there the entire trading day.  That’s certainly a positive, but it isn’t completely blue skies ahead.  As shown in the chart, the next area of resistance for the market here is just above 2,900, and then after that the 200-DMA at just above 3,000. 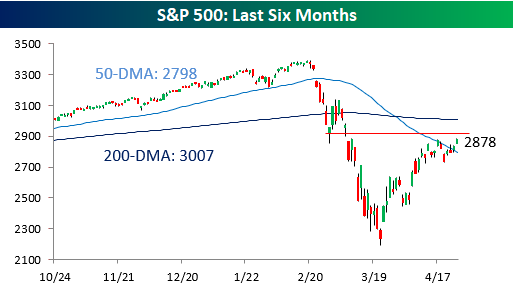 The chart below is from the second page of our Morning Lineup and shows where the S&P 500 is trading relative to its trading range as measured in standard deviations.  It’s been a big run in the last few weeks as the S&P 500 has recovered nearly as fast as it fell.  From here, the best thing for the bulls would be for the market to hang around these levels and build a base at which it could build on later. 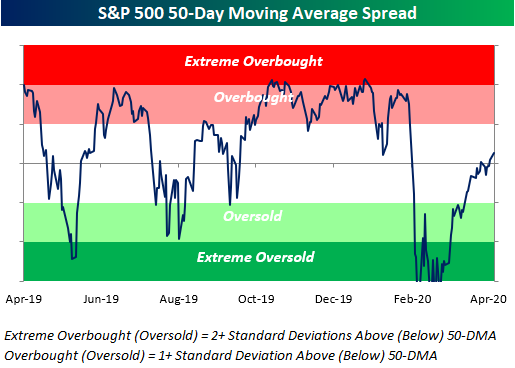