Oil prices are getting absolutely slammed this morning as the front-month contract expires and nobody wants to take delivery.  Even the out month contracts, however, are down by percentages that would look extreme if it weren’t for the crash in the May contract.  Not surprisingly, equity futures are also down substantially as markets look to digest the gains of the last two weeks.

Read today’s Bespoke Morning Lineup for a discussion of the drivers of this morning’s crash in crude oil prices, major earnings releases, and the latest trends in the COVD-19 outbreak.

We often refer to oil as the lifeblood of the physical economy and semiconductors as the digital economy’s equivalent.  Given the moves in crude oil today amid the virtual lockdown of the physical global economy, we present the chart below which shows the relative strength of the Philadelphia Semiconductor Index (SOX) versus crude oil.  For this analysis, instead of using the front-month crude oil contract, though, which is down by a much larger percentage than the rest of the curve due to its expiration today, we used the second-month contract which isn’t down as much today. 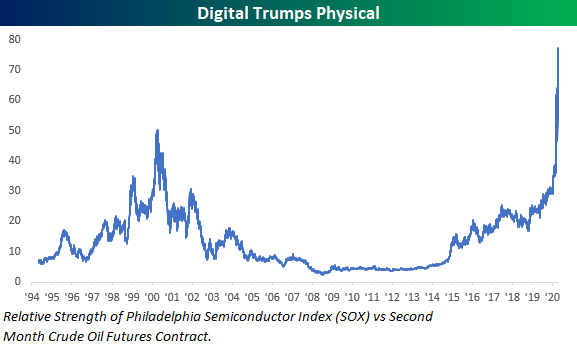